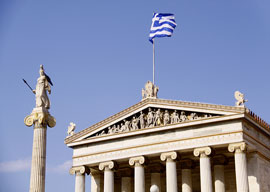 During a seminar organized by the International Herald Tribune entitled “Democracy Under Threat,” not only did Greek Prime Minister Antonis Samaras predict that the Greek economy will soon return to growth, he also claimed that “everybody expects a recovery in Greece as early as next year.”

This was news to “everybody””especially to Greeks on the ground and to the OECD, which reports that it expects the Greek economy to contract by 1.2% and unemployment to rise to 28.2% in the same year the Greek government saw visions of a “Grecovery.”

A pack of Golden Dawn thugs ambushed a leftist rapper by the name of Pavlos “Killah P” Fyssas and stabbed him to death. This was allegedly the first murder of a Greek national by a group that hitherto limited itself to abusing and killing migrants with impunity.

“Despite the government-wide effort against them, Golden Dawn’s standing in the polls remains largely unchanged.”

The customary riots ensued over the murder of Killah P, while Minister of Public Order and Citizen Protection Nikos Dendias rushed to submit legislation to ban Golden Dawn as a criminal organization. “Neither the state will tolerate, nor society accept, acts and practices that undermine the legal system,” Dendias claimed.

Alas, reality begs to differ: Both the state and society have long tolerated the presence of lethal and radical groups on both ends of the political spectrum, while the constitution itself does not allow for the banning of political parties.

Far from extinction, the fascist Golden Dawn is Greece’s fastest-growing party, winning 18 of the 300 seats in the 2012 elections. Tolerated since 1985, Golden Dawn has widened its appeal in recent years by exploiting people’s anger and succinctly articulating valid condemnations of government-induced impoverishment while venting their hatred on vulnerable groups.

Thus far, the party remains defiant in face of the crackdown. Despite the government-wide effort against them, Golden Dawn’s standing in the polls remains largely unchanged.

It would be remiss not to mention the parties who indirectly enabled vile entities such as Golden Dawn to flourish in the first place: center-right New Democracy and center-left PASOK. For decades, both parties not only engineered and presided over Greece’s bankruptcy, maximal corruption, and suicidal immigration policy, they also promptly sold the country out to international creditors without so much as batting an eyelash.

In fact, with PASOK now out of the arena and replaced by the extreme-left Syriza as the main opposition party, New Democracy seems to have adapted to take advantage of Golden Dawn’s appeal to some 425,000 miserable and angry Greek voters. According to Maria Margaronis of The Nation:

New Democracy has played a dangerous game with the neo-Nazis, trying to win back votes by adopting some of its rhetoric and policies while using it as a vigilante force against immigrants and leftists”with help from Golden Dawn supporters inside the police.

Apparently, this dangerous game is an old game.