No Justice, No Piece of the Pie 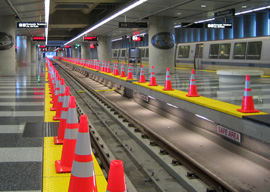 Protesters from the it’s-so-fun-to-wreak-havoc-together outfit “No Justice, No BART” disrupted BART trains’ operation in several San Francisco stations the other day, to the chagrin of the day’s commuters. Or at least I presume it was to their chagrin: Oddly, none were interviewed in the accounts I’ve read.

Shortly after the commencement of leave-work time, a motley mob of chuckleheads, militant college kids, and happenstance hipsters stormed a number of stations downtown, prompting police to prevent travelers from entering said stations and contributing to an overflow nightmare and subsequent third-rail politics. Though by 8PM all appeared to be calm in this palm-tree-laden California city (possessing, ironically, perhaps the nation’s most frigid summers), the event managed to leave in its wake even more litter than was already present in SF, a truly miraculous feat.

“Evidently it’s not merely about calling out a state crime, but rather the implementation of a redistributive regime complete with community-development plans and perhaps even some midnight basketball or a spiffy new recreation center.”

This protest action comes hot on the heels of a shooting by BART police of one Charles Hill, allegedly armed with a knife and broken bottle, combative, and drunk beyond reason. Yeah, they killed him. But NJNB’s roots go deeper, to the aftermath of the highly publicized 2009 Oscar Grant shooting by BART cops. NJNB apparently sees enough similarity in the two cases—both were shot by The Man, you see—to warrant a full-blown list of demands of BART that go beyond individual justice on behalf of two unruly nobodies to, as you might have guessed, Social JusticeTM. They insist that:

The BART Board must implement and fund economic development and youth programs to repair relationships with communities of color!

Evidently it’s not merely about calling out a state crime, but rather the implementation of a redistributive regime complete with community-development plans and perhaps even some midnight basketball or a spiffy new recreation center. This smacks of an extortion racket, so we should expect the disruptions to continue until such demands, all of them ending with a self-righteously infantile exclamation point, are met.

This is all quite rich coming from a group caught shouting racial slurs at BART’s black head (excuse the acne-scarred turn of phrase), Mr. Linton Johnson:

As he spoke to reporters, several white protesters called Johnson, who is African American, “Uncle Tom,” and a “self-conflicted blackie.”