No Light at the End of the Cosmos 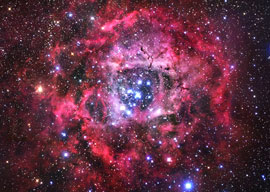 There is no magic in the new Cosmos”no angels or demons, no dragons in Eden, just cold dust and burning gas viewed through rose-colored glasses. No creator gods dominate the production, unless you count the divinized Carl Sagan. His monist prophecy resounds from the outset:

I caught the series premiere of Cosmos: A Spacetime Odyssey at a booze-drenched theater in the Pacific Northwest. Evangelical atheists had placed CFI pamphlets on every table, presumably to soak up beer. Everyone shushes for President Obama’s introduction. From there we join Afro-American astrophysicist Neil deGrasse Tyson aboard his cell-phone-shaped “Spaceship of the Imagination,” where we witness blinding supernovae and Jupiter’s crimson hurricane. Considering that today’s star-child explores the world through a palm-sized iMicrocosm, the cell-phone design was an appropriate touch. I’m so enthused about this show, Tyson could be cruising around in a giant silver vibrator and it wouldn’t spoil my trip to Venus.

“Pop scientists always work around the fact that ultimately, nothing means anything in a purely material world.”

Astronomy was the first in a long list of ridiculous majors that I chose during my Pell Grant-funded university years. All apologies to John Q. Taxpayer, but that course was worth every penny you paid. It’s the last discipline where terms such as “red giant” and “brown dwarf” don’t bring down the diversity committee’s wrath. As usual, I read my textbook from cover to cover, amazed at each intricate mechanism, such as the sun’s proton-proton cycle or the process of planet formation. But the publication that really colored my mental universe was Carl Sagan’s Cosmos. His poetic vision”seeded by the scientific method and brought to fruition upon clouds of reefer“rendered the menacing existence of frozen planets and exploding stars in sweeping brushstrokes of incredible beauty.

Sagan’s masterpiece instills the numinous feelings of religious mythology, weighted with the cold authority of hard science. Fox TV’s new television series approaches that effect, but on a visual level. In one of the best sequences, we are confronted with the mind-blowing scale of our individual lives compared to the cosmos: You are one Joe Schmoe among seven billion others toiling on a “pale blue dot” puttering around a single star drifting on the arm of a multi-billion-star galaxy caught in a cosmic conga line of a half-trillion galaxies bubbling in a cauldron of infinite Big Bangs like so many farts in God’s bathtub. This is supposed to evoke ominous feelings of existential insignificance, but I’m glad our universe is so big. It takes some of the pressure off.

What floored me was the overt mysticism of Cosmos. It’s basically a televised tent revival for secularists. The show finds a fitting home at 21st Century Fox, a network accused of antireligious programming on numerous fronts. Producer Seth MacFarlane is so comfortable in his godless noggin that after he missed boarding Flight 11 on 9/11/2001, he expressed his gratitude to Jack Daniel’s for making him late. Neil deGrasse Tyson is an outspoken and absolutely hilarious critic of Intelligent Design who once compared the anatomical position of human sexual organs to “an entertainment complex in the middle of a sewage system.” Yet in this appearance, Tyson seems quite comfortable with scientism‘s most contentious leaps of faith, such as the multiverse theory or panspermia. Refuting her forebears’ Orthodox Judaism, writer/executive producer Ann Druyan has created another CGI fresco for the public’s flat-screen chapel.

Astronomers arrived at this cosmic consciousness through the extrasensory perception bestowed by X-ray telescopes and supercomputers. Creation myths arose by meditation upon mathematical proofs and the canonization process of peer review. Astrophotographers collapsed gamma rays and radio waves into a more familiar spectrum, transmuting colorless clouds of star garbage into the Crab Nebula’s psychedelic swirls.