No Mosque at Ground Zero 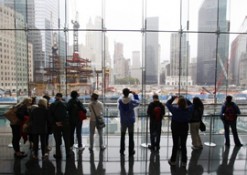 There is an awful lot of blowzy thought swirling around the proposed mosque to be raised two blocks from ground zero in lower Manhattan. Frankly, I doubt that at any other time in our history such a debate would be taking place. People would know that when thugs intoning “Allahu akbar” have slaughtered hundreds of innocent Americans on American soil, it is inappropriate to raise a mosque nearby. The majority of Americans alive today know this. Polling indicates that with them, it is a nonstarter. Now the Anti-Defamation League’s national director, Abraham H. Foxman, has weighed in on the side of good sense. One hopes this debate is coming to an end.

In the current issue of The American Spectator, Angelo M. Codevilla posits two Americas. The first is the “ruling class”: “Today’s ruling class,” he writes, “from Boston to San Diego, was formed by an educational system that exposed them to the same ideas and gave them remarkably uniform guidance, as well as tastes and habits. … Many began their careers in government and leveraged their way into the private sector. … Hence whether formally in government, out of it, or halfway, America’s ruling class speaks the language and has the tastes, habits, and tools of bureaucrats. It rules uneasily over the majority of Americans not oriented to government.” The majority of Americans are in the “country class.”

“There is nothing irrational or bigoted about thinking that a mosque does not belong at ground zero or at the Pentagon or on the Pennsylvania countryside where United Flight 93 crashed.”

The country class, or the “Country Party,” has come down against the mosque, and it goes far beyond New Yorkers. It embraces Americans from all over. They oppose the mosque, and their opposition is growing. On the other side, the ruling class’ spokesman is, not surprisingly, Mayor Michael R. Bloomberg of New York, though he could be from Chicago or Boston or Washington, D.C. Apropos of the mosque, he says: “What is great about America—and particularly New York—is we welcome everybody, and if we are so afraid of something like this, what does that say about us?” First of all, we do not welcome everybody, not drugs lords, not Nazis, not Islamofascists. Secondly, we are not “so afraid of something like this.” Rather, we recognize it as an affront to the fallen and to the nation. Ad arguendo, the affront might not be intended by those wishing to put up the mosque, but it will be recognized by others throughout the world as an affront. Possibly it will be recognized as a sign of the triumph of Islam over nonbelievers. It ought not to go up.

The latest to join with the country class is Abe Foxman. He has done so at great cost to himself. He has members of the ruling class all around him. Yet even he has been guilty of blowzy thought. He says that “survivors of the Holocaust are entitled to feelings that are irrational.” Likewise, the families that lost loved ones on Sept. 11 are entitled to feelings that are irrational, he claims. “Their anguish entitles them,” Foxman says, “to positions that others would categorize as irrational or bigoted.” Thus, because they object, Foxman would build the mosque “a mile away.”

There is nothing irrational or bigoted about thinking that a mosque does not belong at ground zero or at the Pentagon or on the Pennsylvania countryside where United Flight 93 crashed. Americans traditionally raise on such sites monuments to freedom, to courage, to the sacrifices of those lost. Now the ruling class wants to place a mosque at the site of Sept. 11. It is the only time I can recall the ruling class’s ever being in favor of placing a religious manifestation anywhere. Yet in favoring this mosque, the ruling class does put itself squarely in opposition to the country class, so it does have a logic to it.