No Other Dog Would Do 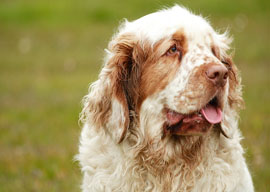 For too many months, for the first time in forty years, we were without a dog. Wattie, the last of a trio of clumber spaniels, had died, gently, of old age. It’s wise, of course, to have a younger dog in the house so that you are not left dogless, but it hadn”t seemed right to have imposed a puppy on Wattie and his half sister Persephone in their last years. The first of the trio, Laurie, had died of cancer a couple of years previously, and getting a new dog then would also have felt wrong. It might not have been fair to the incomer, who would unavoidably have been compared with Laurie, a dog of remarkable character whom I adored partly because he was demanding and in some ways difficult, mischievous certainly.

So for months the house seemed wrong without a dog, though with six cats it was scarcely empty. But my wife would look at the dog area in the kitchen, where there was now no dog, and sigh. Eventually we felt ready for a new one, a clumber, of course. We have had Labradors and springer spaniels, all delightful, the large black Labrador, Smith, perfect when the children were small. The children, all grown up and married, thought a clumber might be too much for us now, but ever since we got our first clumber, Henry, in 1984, we”ve been devoted to the breed.

“The fact is, one becomes not only devoted to clumbers but besotted with them.”

Less skittish than cockers and springers, the clumber is the aristocrat of spaniels. As with most breeds, there is argument about its origins. Heavily built, low-slung, white with lemon or orange markings (lemon preferable in my view), they take their name from Clumber Park in Nottinghamshire, the seat of the Dukes of Newcastle. One story has it that the clumber originated in France, and at the time of the Revolution, the Duc de Noailles sent a kennel of clumbers to his friend, the English duke, for safekeeping, as it were, so that they might escape the fury of the sans-culottes. The story is so good, so charming, that one would like it to be true, but sadly it’s not supported by any evidence, and indeed there seems to be no native French breed of spaniel that resembles the clumber. So I fear it’s a myth, though one I have often retailed.

What is certain it that the clumber was developed as a shooting dog in the great ducal estates of the English Midlands, where its powerful low-slung body, wonderful nose, and determined character made it peculiarly effective in heavy coverts. On the great estates clumbers were worked in teams, and a team of working clumbers is indeed a beautiful sight. On the other hand, all our clumbers have been markedly individual, and team spirit is not the first thing I associate with them.

Be that as it may, they became popular on shooting estates in the second half of the 19th century. Edward VII established a kennel of clumbers at Sandringham in Norfolk, and his son and successor, George V, himself reputed to be one of the best shots in England, and certainly one of the keenest, was devoted to his clumbers, whom he considered the best of all gun dogs.

Clumbers fell out of fashion in the mid-20th century because it was thought that they worked too slowly. Certainly they take their time, rarely leaving an interesting smell until they are satisfied that they have done all the required detective work. When we had springers as well as our first two clumbers, I was always amused by the contrast in their approach. The springers would have a quick sniff, then dash away to investigate something new; the clumbers would take their time, making as thorough an examination of the evidence as Sherlock Holmes was wont to do.