No Room on the Ark 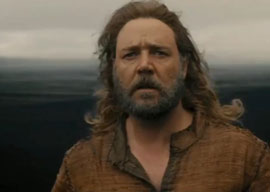 Darren Aronofsky’s Noah accomplishes what any great myth should: it communicates moral truths through a fantasy. Mankind has destroyed the Creator’s creation, and so Man must be destroyed. Women and children will not be spared. Every person must die except Noah and his family”and who knows? Maybe they”ll die, too. Whatever the cost, the rest of Earth’s fragile life-forms must be preserved: “The time for mercy has passed.”

Noah touches on issues that make most people sputter and squirm: the crisis of overpopulation, desacralization, mindless consumption, and impending extinction, which here leads to the unseemly solutions of genocide, infanticide, and in the end, traditional patriarchal values. The men are commanding, the women make babies, and good children shut up and do what they”re told.

But that’s not what people are freaking out about.

I have avoided reading reviews, but scanning the headlines I found plenty of shirt-tearing Bible-thumpers moaning about “no mention of God” and “the director, a known atheist” and “a Babylonian Chainsaw Massacre” and all sorts of hypersensitive gripes like that. Some Muslims in the Middle East moved to have Noah banned, and if Middle America wasn”t still riding an obnoxious wave of secularism, it would have been banned here, too.

“I thought it was the role of “progressives” to stumble blindly off the edge of a cliff. Does it not matter so long as every soul lands on Jesus?”

The indignant squawking of liberal busybodies has gotten so loud these days, you almost forget about the blowhards on the right.

This fundamentalist reaction is equivalent to Pope Paul III punching Michelangelo for painting breasts on Eve. Aronofsky did for the Flood story what Mel Gibson did for Jesus’s crucifixion. It’s easy to miss the brutality in simple Bible verses, but these films force you to bathe in biblical blood. Noah is as deeply religious as it is creative, but the problem seems to be: how creative, and which religion?

For biblical literalists, all scriptural deviation must be authored by the Devil. In that case, the Evil One surely wrote Genesis. Since the 19th century, archaeologists and scholars have presented fairly clear evidence that the Hebrew deluge story is an alteration of ancient Babylonian tales. These were set in stone centuries before the Jews started scratching notes.

In both Mesopotamian myths, the high gods conspire to kill off humankind in a great deluge. In the Epic of Atrahasis, the first humans rapidly reproduce and start “bellowing like wild oxen,” which keeps the god Enlil awake. He makes plans to kill them off. After living in Miami, I can relate.

In Utnapishtim’s story, taken from the Epic of Gilgamesh, the gods of Babylon are like sadistic children who kill helpless insects because they can. In both stories, the hero is tipped off to the plot. He builds a big boat, fills it with animals, and floats away as the storm god wipes the earth clean.

The first Genesis manuscripts probably weren”t written until around the 7th century BCE, just before the Jews were taken into Babylonian captivity. The archaeological sequence suggests that the Hebrews reworked an old script, but they added moral depth. In their version, Yahweh destroys his creation because men have become evil in their thoughts and violent in their actions. The righteous Noah is tipped off. He builds a big boat, fills it with animals, and floats away as the God of Abraham wipes the earth clean.

Aronofsky’s Noah follows in the comic-book tradition of the First Book of Enoch, which was gradually composed from the 3rd century BCE to the time of Christ. This apocryphal text claims that the world was destroyed because “the sons of God” miscegenated with the daughters of men, spawning the Nephilim. These god-babies devoured every bird and beast in sight, like impotent Chinamen at a tiger cock buffet. Never satisfied, they began feasting on humans, then on each other, until the Most High wiped the earth clean, except for Noah.