No Tears for Piers 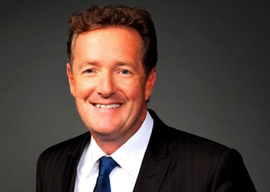 Does anyone still watch CNN, or as I call it, That Irritating Background Noise at the Airport?

When news breaks, most folks hurry to the Drudge Report or FOX News (if ten years’ worth of ratings are any indication).

Last week was arguably CNN’s most embarrassing since that time last May when one of its former execs was caught “putting dog feces in a neighbor’s mailbox.”

In the wake of the Sandy Hook Elementary School massacre, CNN’s Piers Morgan found a cause: gun control. Now some Americans want him deported. And…

After cadaverous human punch line Larry King finally retired from his 9PM slot on CNN, many assumed that homegrown known quantities such as Anderson Cooper or Ryan Seacrest would take over.

English guy Piers Morgan got the gig instead. If Americans knew Morgan at all, it was as that other Limey talent-show judge and a winner on Donald Trump’s Celebrity Apprentice.

“Piers Morgan is clearly auditioning for his next gig, on a stage built with the blood and bones of dead children.”

CNN kept stressing Morgan’s journalistic chops; he was the one-time editor of News of the World and the Daily Mirror, after all.

The average American doesn’t know what a “red top” is or realize that the now-defunct and disgraced News of the World was the British National Enquirer but with Princess Margaret taking on the role usually played by Bigfoot and Morgan serving as Eavesdropper in Chief.

Before that, Morgan abused his lofty position at the Mirror to do some insider trading, for which his wrist was merely slapped. He wasn’t so lucky after publishing hoax photos of British troops allegedly torturing Iraqi prisoners”that stunt cost him his job.

Yet Morgan keeps getting new ones, his stint as King’s replacement being the latest and greatest.

At least that was the idea. He signed a three-year, $8-million contract with CNN, but Morgan’s ratings aren’t impressive. He draws half the viewers of Sean Hannity and Rachel Maddow in the same time slot.

With his contract up for renewal this year, Morgan must have been itching for attention, maybe wishing for one of those nigh on unimpeachable “moral panics” of the sort that keep those British tabloids in business.

Morgan immediately took to Twitter, calling for #GunControlNow, assuring followers he was “praying for the children” and, weirdly, claiming one can purchase an AR-15 “at a supermarket in America.”