Noble Savages and the Antiwhite University 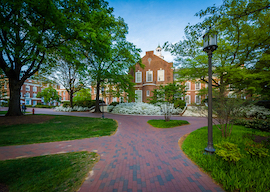 Back in April, some activists from a group called SAPP (Students Against Private Police), full of virtue and wanting to inflict it on mankind, occupied the main administration building at Johns Hopkins University. Located in Baltimore, Johns Hopkins has been trying to create a private, armed campus police force to deal with crimes on and around campus. Activists chained themselves to railings and fixtures. They chained the building’s doors. There could be no armed campus police, they insisted, given the awful death in 2013 of noble savage Tyrone West.

But six years is a long time in what Gore Vidal called the United States of Amnesia, and in a culture teeming with young black martyrs, it may be difficult to distinguish West from similarly fallen heroes. Luckily, the Wikipedia entry on him reminds us that

On July 18, 2013, Tyrone West, a 44-year-old African American male, was pursued by two officers of the Baltimore Police Department after he fled a traffic stop during which cocaine was discovered…. West ultimately died during the scuffle with police and various medical experts have given conflicting assessments of contributing factors including cardiac arrhythmia, dehydration, asphyxia, and extreme environmental temperatures….

The criminal history of Tyrone West dates back to 1991, with prior convictions of assault, battery, use of a deadly weapon with intent to injure, and handgun and drug violations. Notably, West had three previous convictions for resisting arrest, was charged with attempted first-degree murder in 1999, and had prosecutors drop additional charges in another attempted murder case. After convictions for assault and drug distribution in 2000, West spent twelve years in prison before being released on parole during the summer of 2012….

At American universities, students, taking after the professoriate, learn to eschew common sense for what Bertrand Russell called “the superior virtue of the oppressed.” Into the category of “the oppressed” goes anyone who is not a white man. The other part of the morality game consists in blaming everyone’s problems on white men. Thus, in the exceedingly violent city of Baltimore, it’s a bad thing to have armed police nearby to protect you from a man like Tyrone West. And if such a man were to harm you, it would somehow be the fault of white men.

Since American universities are good for little besides taking people’s money, the administration initially took a hands-off approach to the building occupation. The activists issued a list of demands, including the withdrawal of plans to implement an armed campus police force and ending all school contracts with the Department of Immigration and Customs Enforcement—an evil organization, to be sure.

“The simple reality, Povey understands, is that his is the wrong identity. Truth is irrelevant.”

Then, on May 8, Dan Povey, a professor at the university, used a pair of bolt cutters to cut the chains on the doors. “I was the main person in charge of managing the servers in the basement of that building, which are used by me and a large group of researchers in CLSP [Center for Language and Speech Processing],” Povey said. “That morning I was told the situation could last for weeks,” he added, “and during that time we would have no physical access to the building. Servers were already starting to crash, and I felt it would not be long before our whole research infrastructure was unavailable.”

Hats off, then, to Dan Povey. Someone needed to stand up to the delusional little brats, and it certainly wasn’t going to be the diversity bureaucracy that produced them. Nor was the administration likely to appreciate Povey’s principled stand. Indeed, the man was fired on Aug. 8. A letter from Andrew S. Douglas, vice dean for faculty, cited complaints that Povey’s conduct “was motivated by racially discriminatory animus and created a hostile environment.”

Povey has explained his side of the story at his blog, in a post that is worth quoting at length:

I organized a group of what I called “counter-protesters” to try to regain control of the building from the students. This was on the evening of May 8th; there was a scuffle and I was carried out of the building by the protesters. They then made allegations to the Office of Institutional Equity (OIE), saying that I had attacked them. The OIE seems not to have been able to substantiate the allegations that I attacked the protesters, but university leadership still decided that I still needed to be fired….

My feeling is that this mostly has to do with underrepresented minorities, specifically black people (and trans people). There seems to be nothing that Americans, or American institutions, fear more than being accused of racism (or similar ism’s), which leads to ridiculous spectacles like what we’re seeing here, where such a huge organization can be paralyzed by a handful of deluded kids.

Now if I had known in advance that everyone inside the building was black (that was what I saw; although from media coverage it seems that there may have been a white trans person in the core group)—I wouldn’t have gone ahead with the counterprotest. I’m not an idiot; I know that as a person who demographically ticks all the ‘oppressor boxes’, I would have to be severely punished for opposing such a group. I miscalculated by trusting the coverage in JHNewsletter, which seems to have given a false impression of the demographics of the protest; their photos showed mostly white people. Now many of the people sitting outside the building were white, but that seems to have been window-dressing; they were just bystanders and didn’t do anything except take a bunch of cellphone video. All the people that I saw fighting and screaming were black. If it were simply a matter of difference of opinion I expected that Hopkins would at least pretend to be even-handed; but once race and transgender status enter the picture I don’t think that’s possible any more.

The simple reality, Povey understands, is that his is the wrong identity. Truth is irrelevant. So is the university’s educational purpose. “The oppressed,” namely blacks, have only to say the right magical victim words, and the rotten university, in deference to their “superior virtue,” will get rid of the white male scapegoat, and most likely replace him with a standard company man.

Now, one thing “normies” don’t seem to understand about the alt-right and white nationalism is that these movements are reactions to the far left, which vilifies perfectly ordinary white people and dumps on whites constantly. Still, look around: In intellectual contexts—academia, the media—antiwhiteness is now so rampant that a man such as Dan Povey, who, so far as I can tell, is no right-winger, becomes a casualty of the mob’s Rousseauist fantasy concerning blacks. Povey’s experience is very much a red-pill one, and one has to wonder whether more white male academics will find that the academy is a degradation not worth suffering. In Povey’s words,

White males in this environment seem to be expected to constantly atone for their existence by telegraphing their exclusive concern for every demographic group but their own, like a neutered puppy-dog or some Justin Trudeau man-child. It’s pathetic, in my opinion; and I don’t accept it at all. I am not prepared to apologize for being who I am.

Corresponding to this expectation of constant atonement is the elevation of blacks to the status of noble savages. Just as Rousseau fantasized about the superior virtue of pre-social-contract man, so in academia—where few people have actual experience of working-class life—blacks are never at fault for anything, but rather enjoy a precious, permanent victimhood status. In this way, blacks are the effective masters in our deranged moral universe. There is more than a little condescension in this sensibility that replaces black moral agency with passive and absolute victimization, and yet since there are goodies to be obtained, many blacks are perfectly fine with the dishonest situation.

Meanwhile, not every white male professor wants to live “like a neutered puppy-dog or some Justin Trudeau man-child.” I finished my own education at the Master’s Degree, despite once having had some idea of becoming a professor, because I saw that I was surrounded by men who were only too willing to apologize for being who they were, to characters who hardly merited such abasement. In the past two years, I have received several emails from young academics, all men, telling me that they feel out of place in the academy. They have every reason to feel that way. Besides being a fraud, and morally obscene, the academy is not even very interesting intellectually outside of STEM these days.

Not that it’s any less influential for all that. On the contrary, we can count on academia, like the media, to keep propagating antiwhite sentiments, and to keep inculcating the destructive values of blind pity, needless guilt, and white self-loathing. In response, there will be defiant men like Dan Povey, who demonstrated courage and leadership without trying to harm anyone. There will also be men like the El Paso shooter Patrick Crusius. Feeling left behind and not wanting to be scapegoats, they react to bad cultural changes with violence and wickedness. Whether the inept politicians and the intellectual class will ever recognize their own responsibility in the tragedy is a good question.