Nostalgia: A Taste of the Eternal 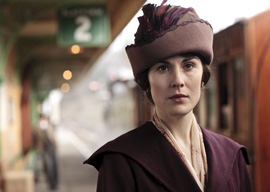 Downton Abbey“s popularity in the United States comes as little shock to those who remember the early 1970s” Upstairs, Downstairs craze. In a word, the show’s popularity is fueled by nostalgia.

That word came to mind again a few days ago while enjoying the Weimar-styled antics of Max Raabe and the Palast Orchester at UCLA’s glorious Royce Hall. The crowd went wild, demanding three encores. Such a large fan base for such an arcane group in Los Angeles comes as no surprise to those familiar with the Cicada Club or the doings of such neo-vaudevillians as Evans and Rogers.

Yet it is not only the pre- and inter-war years that have their fans. I have long been a member of the Mythopoeic Society. The Renaissance Faire is big business out here, and the Society for Creative Anachronism started in Berkeley.

“The nostalgic person yearns for a perfect world that he is wise enough to know he cannot impose upon his fellows.”

We need not be so exotic as to wear formal evening dress or even chain mail. The Mad Men era has its stalwarts, and any authentic bar, restaurant, or hotel surviving from that epoch owes much of its success to time travelers.

Nostalgia is big business because the here and now is annoying and drab. Sensitive souls escape the present any way they can: past, future, or multidimensional. This urge to combat insoluble problems with a retreat to le bon vieux temps, or to the exotic, or to the imaginary is deeply implanted in us. Such flight”often fueled by poetry or music, drink or drugs”has always been with us. The hippies, the Beats, the bohemians, and the Celtic Twilighters partook of it. So did the Romanticists in their innumerable forms, from Novalis and Chateaubriand to the Pre-Raphaelites and the Nazarenes. Even the 18th century saw the Enlightenment combated with Gothicism and Chinoiserie. The impulse to internal exile in difficult times is not restricted to Europeans, as the Seven Sages of the Bamboo Grove and the tea ceremony‘s originators can attest.