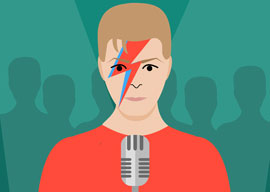 One should not speak ill of the dead, of course, especially of the recently dead, but it does not follow that one should speak well of them, or speak of them at all. Personally I was astonished at the amount of coverage given to the death of David Bowie. One might have thought he was really a figure of world historical importance such as David Beckham or Leonard DiCaprio.

On the day after his death, the supposedly serious newspaper that I take most often when I am in Britain, The Guardian, ran a special 12-page supplement on his life and activity, as well as five pages in its normal section. There have been articles about him on the two subsequent days. I wait patiently for the tide to turn.

I could not help thinking, when I saw all this gush, of the late Simon Leys” characteristically brilliant and penetrating essay on AndrÃ© Malraux, the writer much appreciated in France but who exudes the authentic odor of charlatanry. Leys was a Belgian sinologist who lived more than half his life in Australia and, besides being the author of devastatingly critical but mordantly funny books about the Great Cultural Revolution, was (in my view) by far the finest literary essayist of the age.

“Popularity itself neither confers value on anything nor detracts from it.”

He began his essay on Malraux by telling an anecdote against his admirers. A parish priest gives an impassioned sermon that reduces the entire congregation, except one man, to tears. Afterward the man is asked why he remained unmoved when everyone else was so powerfully affected. He replies, “I am not of this parish.”

Well, when it comes to David Bowie, I am not of this parish. It is true that I know, or knew, practically nothing of him. I recognized his face, I need hardly say, as a North Korean necessarily recognizes the face of Kim Il Sung, for omnipresence brings its consequences, but that is about all. I am sure I must have heard, though not listened to, some of his music as it was pumped like poison gas into the public space; but I made no particular effort to increase my acquaintance with it.

I acknowledge that by avoiding contemporary Anglo-American pop music (contemporary, that is, with my life) I may have missed productions of genius. But on the whole I have preferred to listen to what a cultivated American friend once said to me: that you don”t have to eat a whole pound of butter to know that it’s rancid. I prefer the popular music of almost any region of the world to the Anglo-American (especially the Anglo). By comparison with the latter, Latin American, African, Arab, or Indian has long seemed to me infinitely preferable, and greatly more civilized. Popularity itself neither confers value on anything nor detracts from it.

The immense coverage of David Bowie’s death in The Guardian did not entirely convince me of his genius, except for self-exhibition. There, it is true, he excelled. In his public appearance he seemed to appeal to our culture’s magpie instinct for the militantly meretricious. I listened to a little of his music on the Internet and suffice it to say that I was not transported by it. The last page of The Guardian‘s commemorative supplement, no doubt for its readers to treasure for fully three days, had a couple of facsimiles of the manuscripts of a couple of his lyrics, treated with reverence: If the manuscript of a sonnet by Shakespeare had been found, it could hardly have been treated with greater reverence.

The first lines of one of the lyrics read: