Not That Kind of Sexual Predator 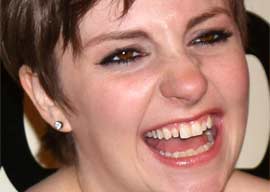 As the “brains” behind the inexplicably acclaimed HBO series Girls and the author of the #1 bestselling book Not That Kind of Girl, Dunham is hailed as a cultural pioneer for doing what has become as stale as a yeasty vagina”namely, she is a female who is congenitally incapable of writing about anything besides being a female. It’s the same way that black writers can only write about being black and gay writers can only write about rump-wrangling.

Since I was born on the wrong side of the tracks and then booted out of the house in my teens onto the tracks and forced to start running lest I get hit by a train, the fact that she was born into insane levels of wealth yet can”t shut the fuck up about being “oppressed” makes me wish that she would accidentally overdose on painkillers and wake up to find herself stewing in a cannibal’s pot somewhere in Swaziland where there is no iPhone coverage.

“By her own admission, this sort of creeping-flesh incestuous sex play continued until Dunham was seventeen.”

My main beef with modern leftism isn”t even that it’s rooted in the stupid idea of equality but that it lives, breathes, and gains succor and strength through the most unabashed sort of hypocrisy I”ve ever seen, and I thought I”d seen “em all. Modern feminists of the unforgivably overprivileged Jezebel ilk”the sort of white girls who hate being white yet loooooove being girls”twist their labia in knots over the sorts of trifling “microaggressions” and “shaming” behaviors which are so insubstantial that an electron microscope couldn”t detect them, yet their entire platform consists of attempting to lob nuclear shame-bombs at men. For all they wail about male “sexism””and that’s ALL THEY FUCKING DO”nearly every word out of their yaps is a hate-dart aimed to degrade, humiliate, and demoralize men.

In Not That Kind of Girl, Dunham, who”of course!“attended Oberlin College, details a bumbling sexual experience with a male “campus Republican” that occurred smack-dab in the midst of the Bush II era. By her own account she offered zero resistance, either physically or verbally, up until the point where she realizes her one-night-paramour isn”t wearing a condom, whereupon she dismounts and tells him to leave, at which point he dutifully leaves.

Now, nearly a decade later, she has solemnly decided that this seemingly consensual encounter was, in fact, RAPE. For modern feminists, claiming to have been raped, whether it actually happened or not, is the equivalent of achieving the rank of Eagle Scout. As a result of this highly dubious “revelation,” Dunham raked in a wheelbarrow full of invisible feminist-hero poker chips to spend at her discretion.

Unfortunately for Dunham, last week the other Rape Shoe fell with an ugly thud, and now she’s being portrayed as a sexual predator who performed some highly skeevy acts with her younger sister Grace.

The term “sexual predator” is crucial here, because in Not That Kind of Girl, Dunham used it to describe her own behavior, but now she’s backpedaling and claiming she’s not that kind of sexual predator. Facing a backlash not only from conservative sites but also among her intersectional feminist allies and comrades and sisters, she now insists her use of the term was a poorly concocted joke that flew right over the balding heads of rapidly aging right-wing dudebros.

In one passage from the book, Dunham describes an incident when she was seven and used her fingers to peel open one-year-old Grace’s vagina, only to find that the mischievous little sprout had hidden pebbles inside of it. Dunham claims that her mother didn”t blink at the fact that she was spreading open her younger sibling’s vadge because it “was within the spectrum of things that I did.” (Then again, her mom is an “artist” whose “work” consists of such things as photos of a nude mannequin with a dog, while her dad was known for painting giant hairy vaginas.)

Dunham continues about her not-at-all-rapey relationship with her younger sister:

As she grew, I took to bribing her for her time and affection: one dollar in quarters if I could do her makeup like a “motorcycle chick.” Three pieces of candy if I could kiss her on the lips for five seconds. Whatever she wanted to watch on TV if she would just “relax on me.” Basically, anything a sexual predator might do to woo a small suburban girl I was trying.

Here is a photo Dunham proudly posted to Instagram of when she made up her five-year-old sister as a “motorcycle chick” with lipstick and even fake boobs.