Notes From a Messy Study 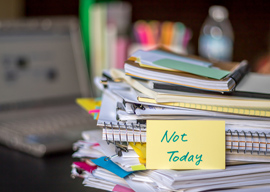 The ambition of a friend of my wife’s is to die with her house tidy. I have a similar ambition in respect of my study. I want to die with my books and papers ranged in what in the prison in which I worked as a doctor was called Good Order and Discipline, GOAD for short (ours is the golden age of the acronym and PIN codes).

My so-called ambition should have given me an insight into, or sympathy with, utopian thought, for I know in my heart, and even in my head, that it will never be achieved, but somehow the ambition never dies. In reality, it is more daydream than ambition, like many a young person’s “ambition” to become a pop singer or a footballer. For every success, there must be a thousand failures.

I have failed in my efforts to clear up my study if not a thousand times, at least many times. I have periodic spasms of effort in that direction that always end in defeat. I had one of those spasms last week, but of course the disorder, never fully overcome, will soon fungate again.

The spasms are not entirely unpleasurable, as I always come across things that I had forgotten that I had ever had, for example (this time) letters by eminent people of the past such as Sir Morell Mackenzie, the Victorian laryngologist who was blamed for the death of the German emperor Frederick from laryngeal cancer, which he had failed to diagnose and treat in time. (He wrote a book justifying himself titled Frederick the Noble.) It is an illusion, no doubt, that holding an original document gives you an insight into the past that a mere transcript or facsimile of it cannot give, but if so it is an illusion from which I have never been able to free myself.

“I have failed in my efforts to clear up my study if not a thousand times, at least many times.”

And then, under one of the many piles of books, I found, or re-found, two slender folders that were in an old bureau that I bought years back. One was of three dreadful poems by the owner of an Elizabethan mansion, two written in 1857 and one in 1863. The author was a descendant of the old Catholic gentry who were persecuted in Elizabethan times; and in his poem “Address of an Aged Rook to His Community,” written in the clearest of handwriting, he recalls a period of exile long ago:

As to exile, we loath’d it, and pray’d
That such fate be put off till the morrow;
But, the more we our exile delay’d,
The more keen was our anguish and sorrow.

The other is an edition of a Victorian serial publication called the The People’s Gallery of Engravings in which was inserted a curious handwritten page, Victorian to judge from the writing, with the following questions:

Do you value your vote more?
Do you abhor sweating?
Do you think intemperance and evil?
Does the thought of starving men worry you?

On the reverse side were a series of strange assertions:

But the most interesting document that I found, which I must once have studied carefully though it left no trace in my mind, was the dossier on a case of assault and criminal damage in which I had been asked to prepare a medical report on the perpetrator (mostly I prepared reports on murderers). The reply of the accused to the police during his questioning gives an insight into the social and cultural life of a portion of the youth of Great Britain, the nation’s future: