Notes of a Bibliomaniac 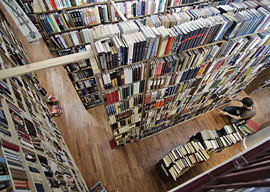 I think I suffer from the only behavioral disorder that does not appear in the Diagnostic and Statistical Manual of the American Psychiatric Association. This is rather odd because the disorder has been known for at least two centuries, ever since the Reverend Thomas Dibdin published his great work in 1809, Bibliomania; or Book-Madness: containing some account of the history, symptom, and cure of this fatal illness.

The symptoms are as follows: The sufferer cannot pass a bookshop, or even an establishment that might have a few books for sale, without entering and buying a book. He spends far more on books than he ought or than his income can bear; he reads books arithmetically but accumulates them geometrically, so that there is a kind of Malthusian crisis in his house that will be solved only after his death, when his widow sells them en masse. (Practically all bibliomaniacs are men.)

For myself, I have a penchant for the obscure and seemingly unremarkable, often (because I am a doctor) with a medical slant. The other day I went into a bric-a-brac shop which had a small cabinet of books and bought a slender volume published in 1857 with the title The Successful Treatment of Scarlet Fever: also, Observations on the Pathology and Treatment of Crowing Inspiration in Infants, by P. Hood, surgeon.

What made the book irresistible to me, though, was the inscription on the title page, written in an elegant hand but with a refractory nib or quill, such that there were little smudges of black ink on the bottom of the book that reminded me of my struggle in childhood with a similarly refractory iron-nibbed pen and watery blue ink that got everywhere, including in my hair. The inscription was Thos. Hayes Jackson M.D., Darlington.

Neither Hood nor Jackson are names famed in medical history; it I their obscurity that interested me. Of Dr. Jackson, though, I was able to find some trace on the Internet, that astonishing tool for both good and evil. He was buried, aged 69, in West Darlington Cemetery, in 1879, followed 23 years later by his widow. 1857, the year of the book’s publication, seems to have been the high tide of his literary and scientific efforts, for in that year he published two letters and a paper in the British Medical Journal, the latter about the illnesses of lead miners of Arkendale and Swaledale (near Darlington), which he describes at the beginning of his paper as “a wild, romantic district, abounding with craggy rocks, wood and water, hill and dale” where “the sublime, the terrific and the magnificent are intimately blended.”

The life of the miners, though, was less than sublime. They were “an industrious, sober, intelligent class of people,” but they were poor and did not live long because of lung diseases consequent upon mining, such that their average life expectancy was only forty-five or fifty. This, however, was ten years more than the lead smelters. So poor were they all that when they died of illness or accident, their families had no choice but entry into the workhouse. Because of the lead from the washings from the mine, “fish cannot exist in the rills or rivulets” near them, though they are abundant elsewhere in the district. Dr. Jackson’s humanity shines through his report.

His oldest son, whom I was able to trace, was Thomas James Jackson, who died on December 9, 1916, aged 74, in Constantinople, where he had been “held,” presumably as an enemy alien, since July 1914. He had obviously lived long in Turkey, for on February 6, 1883, he had married at Trebizond a Stephanie Eugenie Angelique, eldest daughter of the Chevalier de Herzfeld, Austro-Hungarian consul-general and former counselor to “the late Maximilian, Emperor of Mexico.” In these very few details of the life of the oldest son of Thomas Hayes Jackson, M.D., of Darlington, we see reflected the tragedy of the complete smash-up of Europe in 1914, whose centenary we are about to “celebrate.”