Notes of a Fed-Up Southerner 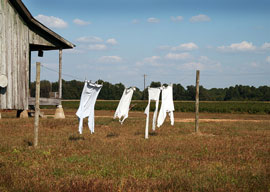 Coming up as I did a Southern boy, usually barefoot, lots of times with a cane pole and a string of bream I caught in Machodoc Creek, and other signs of higher civilization, I believe I could get tired of Northerners huffing and puffing about how moral they are. Ain”t nothing like a damn Yankee for smarmy hypocrisy. They can spit it out in chunks like saw logs. A Yankee can”t open his mouth without preaching about how everybody else ought to do something he won”t do himself.

It’s always the same thing, about how the South keeps blacks in poverty and has lynch mobs. (Actually, it’s been at least three weeks since I was in a lynch mob.) To listen to these pious frauds, you”d think Northerners just loved black people and spent most of their time with them at the country club, talking the stock market. Why, how else could it be?

I couldn”t lie so much if you gave me a bird dog and a buzz saw. It ain”t in me. The worst schools in the country are in Mississippi, which doesn”t have any money, and the second worst are in Washington, DC, which has all our money. Yes, Washington, so virtuous it makes your teeth curl. How many white kids are in those schools? Uh-huh. It’s you and him integrate, not us.

You”ve heard about white flight. In nearly about every city in the North, white people streak for the suburbs so’s not to be near black people, and then they talk about how bad Southerners are for doing the same thing. I guess talking moral is more fun than being it.

“A Yankee can”t open his mouth without preaching about how everybody else ought to do something he won”t do himself.”

Fact is, you can see more social, comfortable integration in a catfish house in Louisiana than you can in probably all of Washington.

Now, sometimes I have to yield to the truth. I don”t like to, but it’s forced on me. Blacks do live miserable in Southern cities. It can’t be denied. There’s a shameful list of awful cities and it hurts me to write it: Newark, Trenton, Camden, Detroit, Flint, Chicago, and Gary. Pretty much the entire South.

Facts is, the South itself was always poor, dirt poor, pea-turkey poor, especially after 1861, and a lot of what it was and how it felt came out of that. Songs like Ode to Billy Joe to Yankees are funny, the kind of thing you”d expect from those hicks down there. But they tell how it was for a lot of folk. Red dirt hills where nothing much wanted to grow, and there was nothing much to do and sometimes nothing much to eat. It was ugly, Tobacco Road, and the North laughs at it. Even in the mid-Fifties you saw”I saw”kids from the countryside of Alabama with their teeth black from decay, and in some regions school vacations came at cotton-picking and cotton-chopping time. You could easy find people living in fall-down shacks, white people too. Thank you, Mr. Lincoln.

Let me remind us that the South has generally had to bring to the North the benefits of culture. It figures. Industrial society is so full of stench and soot and misery and crowding that people can”t even do a good job of being unhappy. That’s why the great bluesmen like Mississippi John Hurt and Lightnin” Hopkins came out of Dixie. So did jazz, and country music, and Dixieland jazz, which is different, and bluegrass, and rock “n” roll thanks to Big Boy Crudup and Elvis. Yankees can play longhair music pretty good, but they stole it from Europe.

The South, though. It was a different place, mostly kind of sad I guess if you looked close, but it could grow on you. Those hot, quiet cotton fields in the Delta, where time passed sweet and slow like sorghum syrup dripping on busted china, and it was so peaceful and the air so soft you figured maybe there was a God after all. There wasn”t, though. At the time you could stand there and think that it would go on forever, that there was something comfortable and familiar that wouldn”t turn into something else you didn”t want. But it did. Nothing lovely can last when next door you have an infernal industrial smoke pit.

There was a wildness to the South, a sense that anything could happen. It didn”t feel controlled. Maybe it wasn”t obvious. People talked soft and slow like the Good Lord intended, instead of honking through their noses the way they do in Brooklyn, and they were polite and friendly. You didn”t want to lean on them, though. That wasn”t a good idea.