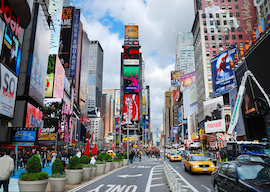 This is the bad news, the good being that the word “Brexit” means nothing over here, nada, as our Hispanic cousins crawling all over the place say. Instead of the B-word we have the S one, as in the college admissions scheme that turned into a scandal. More than fifty people were busted last week for paying lotsa moola to get underqualified students fraudulently accepted into some of the country’s top universities. Lots of hedge funders and Hollywood wives, so what’s so surprising about that? And why is it news now? George W. Bush was a C student in high school and would never have gotten into Yale but for…well, we all need a bit of help from Papa once in a while. JFK Jr. was so thick, even Brown U—Brown was on the take more than any other school back then—hesitated but finally took him. The worst was Jared Kushner, whose old man, a convicted felon, paid $2.5 million for his son to be accepted to Harvard. It sounds cynical, and it is. But then who said that life was fair? If it were, Michael Jackson, the most flagrant pedophile ever, would have been jailed very early on, but being black—although he later turned white—kept him out of the pokey and into little boys’ pants.

The reason this college scandal hardly registers is because it’s nothing compared with schools that operate as corrupt big-money fronts for pro basketball and football. Student athletes in those two major pro sports are 90 percent black, and many graduate without the ability to read or write but are called college grads. When they fail to make the big time, a life in crime is preordained. Now, that’s what I call a scandal. The only cry in the wilderness is that of a great sportswriter for the N.Y. Post called Phil Mushnick, who has been writing about this for years—but who’s listening? There’s moola to be made.

“Who’s listening? There’s moola to be made.”

Never mind. There’s always #MeToo. And a revival of Cole Porter’s Kiss Me, Kate, a wonderful musical comedy based on The Taming of the Shrew that surely rankles girls’ sensitivities nowadays. There’s wife-slapping and demands for womanly submission and the great line of “If her behavior is heinous, kick her right on her Coriolanus.” My, my, naughty William and Cole, how could they write such stuff? I went to the play and noticed that Kate kicked Petruchio much harder than in the 1953 movie, thanks to today’s sensibilities. As a wit wrote, Kick Me, Kate would have been closer to the point.

At a dinner party chez Michael Mailer everyone wanted to know what is happening with Brexit. I was too drunk to explain, so I told them that Theresa May and her fellow Remainers did what they always planned to do: keep Britain in. It is the E.U.’s method of doing away with democracy. If once you fail, vote again, and again, and again until… People thought I was kidding, but even drunk I thought I had it right. N’est-ce pas, chers amis? Britain has become the laughingstock, and why not? The E.U. commissars have now taught a lesson to anyone who has the bright idea to break clear. It’s later and harder than you think. And the political class in Britain and everywhere else holds all the marbles. Social media has divided the people like nothing else before, so we now stick to our own bubble and have learned to take it. Jean-Claude Juncker slaying the British lion would be a great painting, replacing that of Saint George and the dragon.

Finally, The Donald. As a newcomer to the White House a couple of years ago, he faced unprecedented media hostility and a plethora of rumors launched by the very media that was investigating him. Until now nothing has stuck, which really rankles the Fourth Estate. The latest I liked the most. There is a Chinese brothel owner in Palm Beach by the name of Li Yang. She politely calls her establishments massage parlors. A dirty old man by the name of Robert Kraft, a billionaire who owns the New England Patriots, the No. 1 American football team, was caught using the massage places and photographed paying for what should come naturally. I don’t like Kraft because he’s a groupie and a phony, and now I like him even less because he’s also a cheapskate. He paid 200 bucks, a sum that doesn’t take a working girl very far. So one Michelle Goldberg of the Times went bananas and attacked Trump for being a friend of Kraft’s. (Something I’m not so sure about.) It looks like desperation to little ole me. If we can’t find something on Trump, the cheapskate Kraft will do. And people are bound to confuse the two; they might even think it was Trump using the brothel. Good old Times writing at its best.