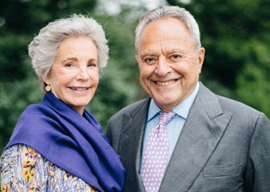 This was a real surprise—and on my birthday, Aug. 11, to boot: A grown man, whose parents I used to know and like, wrote in the sophisticated pages of The Spectator that what women really want is a man with a big house. Golly, you don’t say. For God’s sake, stop the presses!

Better yet, get off it, or pull the other one—no one is that naive, not nowadays anyway. I know I sound jaded, and I’m sure the writer was playing born yesterday, but just one week before his article came out I had commented on how one can tell a man by the type of boat he owns or the woman he’s with. Gianni Agnelli—the long-gone Fiat head—and I used to play this game nonstop over the years. I’d throw out the name of a woman we both knew, and Gianni would comment on the man she would hypothetically end up with: a “pimp,” or a “semi-gentleman,” the worst being “Poor, poor man, he’ll never know what hit him.”

It wasn’t nice, but it was fun, and no one took it very seriously. Gianni liked women as much as I do, but we each had our types. His were big, brassy, and sexy, like Anita Ekberg, the Swedish bombshell movie star who was his mistress for ages. Mine were sweet, young, and innocent. Where the fair sex was concerned, Gianni looked for the genre that played in film noir; I was more of a dreamer. I once brought the beautiful wife of an Englishman onto Gianni’s boat—we had run off together for a dirty weekend—and overheard him describe her to an English duke, also a guest on the boat: “She’s rather sweet, David, like those football wives I have to give dinner to at times.” (Gianni owned the Turin powerhouse Juventus.) The lady in question was upper-class and restrained in her opinions, which in Gianni’s world-weary eyes made her a footballer-moll type.

“There is nothing more beautiful to behold than an innocent and feminine woman.”

But back to what women want. What they don’t want is a loser. About fifteen years ago, off Patmos on Bushido, my wife Alexandra had gone to bed once I began drinking with my crew of six and an old karate buddy. Four young women walking along the quay stopped to admire the boat. I asked them on board for a drink. They were working-class, so-so where looks are concerned, and delighted to come on board. The first thing one of them said to me was “Are you the cook?” “No, I’m not the cook, I’m the owner,” I answered. Not to bang on about something that happened so long ago, but once it was made obvious to her that I owned the beautiful sailing boat, things improved. The actual cook, a young German man who was the greatest pickup artist I’ve ever come across—and who had come in very handy in Mykonos the week before Alexandra had arrived—was having a successful evening and had retired to his quarters with one of the ladies, while the rest of us apparently became very noisy on deck. Suddenly my wife appeared and ordered everyone off the boat. While putting her top back on, the one who thought I was the cook whispered to me, “I knew you were the cook,” and left in a huff.

Point of the silly story, Alexandra sounded like the owner, and I looked like a hired hand, so she was glad to get dressed and get off. So what else is new? Well, I’ll tell you: I’ve been very happily married for 45 years, and my wife has never embarrassed me in public, except for once. We were going to some premiere in New York and some hack asked me the name of the lady I was with. “She’s the mother of my children,” said I. “That’s what he thinks,” trilled Alexandra, and the hack started to laugh. Although she’s never been best pleased with my fooling around, she knows I’m not the type to drop her for a newer model. One can be a faithful husband and a bad one, as one can be a faithless hubby but a very good one. She thinks I’m the latter, so yippee!

The reason I don’t like brassy broads is because there is nothing like a dame, as the song says. There is nothing more beautiful to behold than an innocent and feminine woman, and by innocent I don’t mean naive or not too shifty upstairs. I mean someone who hasn’t been around the block too many times, to use a Chicago expression. Such women are not to be found in Hollywood or in Monte Carlo or in Mykonos. They can, of course, be found in proper homes with proper parents and a dog or two. (And ponies.) You readers, I am sure, get my point. I don’t like slags—except late at night when well-oiled—and the kind of women I like don’t make a big house their priority. It works the same for men. There are men out there who chase rich women and find them on boats moored in Monaco with owners such as Philip Green, the Jewish Midas who pays no taxes. Just as there are women out there looking for big houses—big yachts are a better measure of one’s wealth—the kind who deem Monaco and Mykonos heaven. Show me a sweet young thing who turns red when complimented and who prefers a sailing boat to a gin palace and I might leave the wife tomorrow!