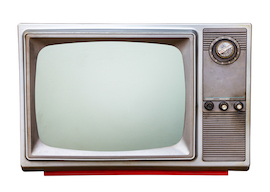 I haven’t had a television for more than fifty years, and though some people tell me that I have missed much of value thereby, which I do not doubt because it would hardly be possible to produce so many tens of thousands (or is it millions?) of hours of television without producing at least something of value, I do not feel that my life has been very much impoverished by the absence of the screen that dominates many people’s living rooms and is as much the focus of their devotions as was the icon in the isbas of the Russian peasantry before Bolshevism got going.

My brief appearances on television have not induced me to change my mind about the desirability or otherwise of having one in my house. I have not mastered the art of the sound bite, and that, in general, is all that one is allowed to provide. The late Neil Postman wrote that television as a medium was intrinsically trivializing, and whether or not this is true in the abstract, it might as well be true if my experience of televisual appearances is anything to go by. They have all been intensely frustrating—for me, if not the viewer. There is no time on television to develop an argument, and while brevity may be the soul of wit, it can also be the soul of shallowness and superficiality.

My last two invitations to appear ended, thank goodness, in my failure to appear on either of the proposed programs. In the first, the producers were making a film about addiction to heroin, a subject in which (before my retirement) I was interested, and about which I wrote a short polemical book. It seemed to me that the modern orthodoxy, that heroin addiction is a chronic relapsing brain disease pure and simple, and nothing else, is not only wrong but obviously wrong, and one moreover that had deleterious consequences. (Error is sometimes good for you, but not in this instance.)

“But what if the media companies are right, that there is no public taste for even minimally serious discussion?”

Then I discovered that the program was to be fronted—I think that is the term—by a self-promoting celebrity, a young comedian who had once addicted himself to heroin, probably because he thought it was a chic or clever thing to do, and whose stock-in-trade was and is the cheapest crudity, which to me is not in the least bit funny (Lenny Bruce was Jane Austen by comparison). He is, in fact, the kind of militantly evangelical vulgarian that the British media moguls, even the higher-ups in the state-owned broadcasting system, have been promoting for years, in the hope perhaps of distracting attention from their enormous salaries by appearing as men (and women) of the people.

As soon as I heard that the celebrity was to front the program, I refused to appear on it. The subject, I said to the producer, was a serious one, worthy of the kind of serious discussion that was not possible with a vulgarian whose main purpose in life was to draw attention to himself by appearing constantly in the public eye. The producer, somewhat taken aback by the vehemence of my position, said that it was only by employing the celebrity that the public would take notice of the subject. If that were really the case, I replied, so much the worse for the public; but I added that I did not really believe that this was so.

More recently a television producer asked me whether I would appear in a live television discussion about another important subject, the sentencing of convicted criminals. It was to last thirty minutes, the next thing to eternity in television terms.

Not having watched television for a long time, I naively supposed that a discussion consisted of two or three people sitting round a table and discussing the matter in hand for the length of time allocated, in this case thirty minutes; not very long, perhaps, but long enough to make some serious contribution.

It was only after a little investigation that I came to understand what the “discussion” would consist of. There would be a studio audience of about fifty who would give their opinion, and then, as a supposed expert, I would have a microphone suddenly stuck under my nose and be asked to give an opinion on what the last speaker or speakers had said. The microphone would then be withdrawn as abruptly as it had been pushed in front of me, before I had even time to finish my sentence.

As it happened, a friend of mine had appeared on the program previously, and had vowed never to do so again. Not knowing this, the producer called him and asked him to appear on the same program. ‘“Will it be a bear pit?” he asked, and the producer giggled faintly. This was exactly what was wanted: high emotion, insult, possibly even threat. What was not wanted were logical arguments, statistics, nuance.

I decided not to appear, but before I could make known my decision the producer called me to say that the whole thing was off, and the question that only two days before had seemed imperatively necessary to discuss was no longer urgent or relevant.

I wanted to express my dismay at the way in which I had almost been misled into taking a six-hour journey each way, with an overnight stay, to speak for at most two minutes—not even consecutively. But even more did I want to protest at the condescending assumption that the public was uninterested in any subject unless it could be sufficiently trivialized into compatibility with the public’s supposedly minimal attention span and thirst for sensation. No doubt there is a proportion of the population that can attend to nothing for longer than a few seconds at a time, but surely (I would have added) that proportion of the population is already more than catered for in other ways. There is no excuse for turning every discussion, even on the most serious subjects, into a gladiatorial spectacle in which the viewers hope for a violent dispute as those who watch motor racing hope for a crash.

But what if the media companies are right, that there is no public taste for even minimally serious discussion? What follows from this?