Nothing Left to Steal 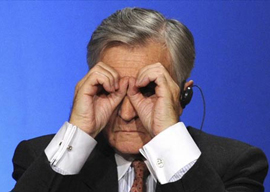 NEW YORK—God, it’s great to be Greek right now. We’ve out-front-paged the Holocaust as well as Iran’s “existential threat” to Israel. (The latter has been jerked up a notch, with Big Bagel papers presenting the Iran “problem” as if it’s 1939 and the Nazis have the bomb.) When the Greek alarm first sounded in mid-2009 in an IMF report, what do you think the elegant Dominique Strauss-Kahn, the towering Sarkozy, and the statuesque Merkel did? They did what I’d like to do to the Spectator’s deputy editor—squashed it and shoved it into a very dark room where no one could find it. Instead of pricking the boil—or boiling the prick, for that matter—they let it fester. This is the way of great men and women. The champion for the inaction was the aptly named Jean-Claude Trichet—in French, the word tricheur means “cheater.”

How stupendously stupid and over-the-top dumb are we, the so-called “people”? How can human beings so lacking in brain function summon the ability to walk or talk, much less realize that we are being taken for the ride of our lives by the crooks in Brussels? These glassy-eyed ghouls knew all along what the Greek crooks were up to but kept shtum for political expedience. The great Greek economist Taki wrote about the problem in these here pages, warning that the politicians were lying and then some, but like Enoch’s prophecy, it went unheeded. In the meantime, two years have been wasted while Greek politicians have been zipping around on freebies looking awfully busy and doing f—- all. Take it from Taki: Because of all the denials, lies, and delays, Greece will need to write down 85 percent of her debt—50 percent is not even close. You have been warned.

“The scum that failed to win power over us through force of arms is now leading us by the nose through stealth and the EU Trojan horse.”

As I speak to Athens daily, I am constantly reminded of the lambent line a fat politico uttered 65 years or so ago when asked why he was giving up power: “Because there’s nothing left to steal.” These, then, are the power-hungry amateurs who got rid of the monarchy in a fake referendum and whose only professionalism lies in cheating and stealing. These same crooks now demand sacrifices, yet among them in parliament are those who took bribes of up to 250 million euros each and are legally immune from prosecution. What kind of idiot would allow such a thing? Yet the Greeks who pride themselves as smart and look down on the Swiss as idiotic have been accepting this state of affairs since the war.

Not that the Brits are any better. Here you have ineradicable proof that the dealers are dealing from the bottom—the specter of democracy, as in a referendum—yet the dealers made it clear that people’s opinions were irrelevant to those who run Europe. Sarkozy and Merkel told Papandreou to fuggedaboutit, and he did. What about a vigorous assault on tax evasion and an end to rampant public-sector patronage? Again, fuggedaboutit. Not a single civil servant has been let go, and it’s been two years since the mess was first exposed. Greek newspapers are as guilty as the politicians whose patronage they seek. A left-of-center large-circulation daily says that the “Germans never beat us, and they’re trying to do it now through the economy.”