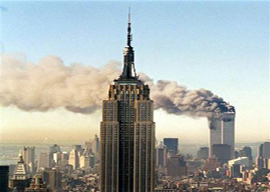 What will you do to commemorate 9/11? The ‘I Will’ campaign has thrown out the question and people from around the country, including a few celebrities, have answered.

That’s from the news website The Inquisitr [sic]. I’m pretty sure I don’t count as a celebrity to anyone but my dog. With the 9/11 attacks’ tenth anniversary coming up, though, the matter of commemoration is worth pondering.

Commemorative events are planned all over the country. In Orlando, the fire and police department bands will lead a tribute: “The lighting of four unity candles representing civilians, fire, military and police will highlight the event.” In Pasadena a memorial will be unveiled while USMC jets do a flyover. For the kiddies, Nickelodeon has already broadcast a 9/11 special.

Colorado seems to be particularly keen on commemorations. In Denver, “Governor Hickenlooper & Mayor Hancock are hosting a commemorative event and concert” featuring, among others, The Beach Boys. In Colorado Springs, “Representatives from local government, business and civic groups have been meeting since January to plan the 9/11 Day of Remembrance.” Not to be outdone, the Boulder Public Library “will host ‘Chalk4Peace,’ a global art project using sidewalk chalk, in remembrance of the Sept. 11 terrorist attacks.”

The biggest and best-publicized ceremony will be in New York City at the World Trade Center site on Sunday. We are told that “dignitaries will recite poetry and the names of the dead will be read out.” The USS New York, a Navy ship built in part with steel salvaged from the World Trade Center ruins, will visit the city, anchoring in the Hudson River near the ceremony. Scotland is sending three—three!—choirs to sing for the commemorators.

And that’s just the climax: New York has events going on all week. All week? For tourists, visiting 9/11-related locations is “THE thing to do in New York City this year!”

I know it’s all well-intentioned, motivated mainly by honest and commendable motives: patriotism, sympathy, and commercial enterprise. I don’t want to rain on anyone’s 9/11 parade. (Yes, there are parades, too.) But why would we want to commemorate those atrocities?

Friends and relatives of those who died will want to commemorate their loved ones, but that is entirely a private matter. Municipal fire and police services and branches of our military that lost members in the Pentagon attack may want to hold collective events. I can’t see any reason why they shouldn’t, and I’m fine with them using public funds for the purpose. But I find myself instinctively reacting against the national commemoration of 9/11.

National commemorations are for national achievements—for positives, not negatives. We might properly commemorate the pilgrims’ successful settlement, the Declaration of Independence’s signing, war victories, and the moon landing. We used to memorialize George Washington and Abraham Lincoln and still commemorate Martin Luther King, but by their birthdays, not by the days of their deaths.