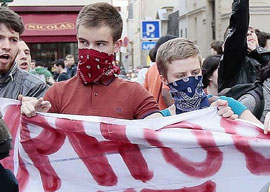 If only the Nazis had “come for” Reverend Niemoller sooner. Maybe then we’d never have to hear his stupid “poem” again.

“First they came…” is well past its stale date anyhow. Here’s my 21st-century update:

First they came for the right-wing fascist skinheads.
But they hadn’t done too much.
So we just made shit up.

In March of last year, when a Jewish teacher and three students were gunned down in Toulouse, the international left smugly and giddily j’accused “French neo-Nazis” of carrying out the dirty deed.

“One could be forgiven for concluding that Meric and his pals went to that Fred Perry sale looking for a fight and got one, with tragic consequences.”

Until a few days later that is, when the killer turned out to be a Muslim, and then suddenly (as the kids say these days) not a fuck was given.

Maybe it’s just me, but few things scream “Holy crap! The Nazis are coming!” quite like reports of Jewish kids being randomly executed in broad daylight in and around the general vicinity of Europe.

But then again, I’m not a super-duper sophisticated French leftist, none of whom took to their (tree-lined) streets to condemn that crime or any other recent outbreaks of anti-Semitism in their country. (OK, stop laughing….)

Smash cut to June 7, 2013. Across France, a reported 15,000 or so protesters assembled to condemn the death of 18-year-old “left-wing activist” and Anti-Fascist Action member Clement Meric, who “died after being attacked by skinheads.”

In good ol’ Toulouse, we’re told, “demonstrators””apparently all born without the irony gene”“held banners that read ‘As some protest, others kill.’”

And note that only “some” are allowed to “protest”: The city’s mayor rushed to ban “fascists” from holding a previously planned rally to commemorate the Christian victory over Muslim invaders in the 721 Battle of Toulouse.

Not to be outdone, the French prime minister himself has ordered the “dissolution” of a “fringe far-right” youth group that may or may not have had something to do with Meric’s death.

(The French government can apparently “dissolve” groups it doesn’t approve of, and yes, that does sound kind of, well, fascist of them.)

Now, as to the death of Meric itself, what happened exactly?

No one with even passing familiarity with the Official (Leftist) Version of History”from Sacco and Vanzetti and the Rosenbergs to Tawana Brawley and Trayvon Martin”will be surprised to learn that the victim in this case may not have been entirely blameless.