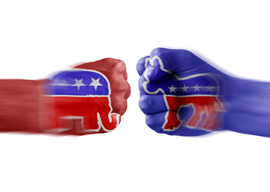 We are in terrible straits this presidential election. We have a choice between a president who has posed more of a danger to personal freedom than any in the past 150 years and a Republican team that wants to return to Bush-style big government.

President Barack Obama has begun to show his hand at private fundraisers and in unscripted comments during his campaign. And the essence of his revelations is dark. His vision of a shared prosperity should frighten everyone who believes in freedom, because it is obvious that the president doesn’t. He believes the federal government somehow possesses power from some source other than the Constitution that enables it to take from the rich and give to the poor. He calls this “a new vision of an America in which prosperity is shared,” and he declared, “If you’ve got a business, you didn’t build that. Somebody else made that happen.”

“Even though Ryan is a smart and humble and likeable man who was once a disciple of Ayn Rand on economics, as am I, the Republicans want the Bush days of war and spending beyond our means and assaults on civil liberties to return.”

Today in America, nearly half of all households receive either a salary or some financial benefit from the government; the other half pay for it. In Obama’s vision for America, no one will be permitted to become too rich, no matter his skills and hard work. He somehow believes that government seizures and transfers of wealth generate prosperity. We know, of course, that the opposite occurs. Seizing wealth through taxation removes it from the private sector for investment. That produces job losses and government dependence on a massive scale.

The federal government has a debt of $16 trillion. We have that debt because both political parties have chosen to spend today and put the burden of paying for the spending onto future generations. The debt keeps increasing, and the feds have no intention of paying it off. Every time the government has wanted to increase its lawful power to borrow since World War II, members of Congress and presidents from both parties have permitted it to do so.

Last week, Gov. Mitt Romney, the presumptive Republican nominee for president, blasted Obama for borrowing more than one trillion dollars in just the past year. He must have forgotten to look at the voting record of his designated running mate, Wisconsin Congressman Paul Ryan.

Ryan voted for nearly every request to raise the debt ceiling during his 14 years in Congress. He voted for TARP, the GM bailout and most of the recent stimulus giveaways. He also voted to pay for the Iraq and Afghanistan wars on a credit card, which added another trillion dollars to the government’s debt. And he voted to assault the Constitution by supporting the Patriot Act and its extensions, as well as Obama’s unconstitutional proposal to use the military to arrest Americans on American soil and detain those arrested indefinitely.