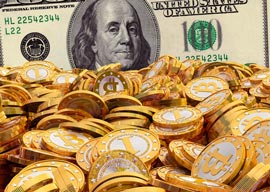 The announcement was printed with little fanfare. On Feb. 1, 2013, the Dow Jones Industrial Average (DJIA) exceeded its precrisis high point of $13,903.01, hitting $14,054.49. The news didn”t excite many since it had been a long time coming (five years). More remarkable are the gains between now and then: Sticking with the DJIA, on Jan. 8, 2015, the index reached $17,568. Not only had previous highs been beaten, but on both dates we reached yet another apex of an ongoing three- to six-year bull run”depending on your entry point.

To put it another way: The DJIA reversed its downward trend on Jan. 1, 2009″and never looked back. Despite all the hype regarding Great Depressions, the index barely paused in its climb henceforth, and its value seldom slid, and so briefly it was negligible. For the other indexes, too, the bull run began astonishingly quickly, by mid-2009 at the latest. The time required for markets to begin to reverse the downhill trend of the biggest financial crisis since 1929’s was a mere 300 days at most. Compare this period with the “Great Depression,” by contrast, which lasted an entire decade. The day was also marked, tellingly, by the biggest solo auction of a living artist: when Damien Hirst sold £111 million of his own work through Sotheby’s, London. It was a coup in terms of timing, and a major achievement for an artist to metamorphose into a market-maker at the same time. Previously, this was the sacred domain of only the best-informed dealers, valuers, and collectors.

It is “telling” because it marks the change in investing strategy and the (not new, but) renewed focus on scarcity, singularity, and luxury that dominates our culture right now, with prime property, fast cars, and artworks representing the most desirable and overpriced investments available”as highlighted by FT columnist Merryn Somerset Webb. In another journal”in a foreword headed “The Crisis Is Far From Over””she alludes to assets of non-economic value that increasingly are traded at ultra-high prices and “sight unseen.” She detects in this trend a disease whose symptoms include “the search for a store of value in a super-low yield and uncertain world.”

A super-low yield and uncertain world

By 2013, the U.S. economy had long since emerged from the state of emergency pursuant to the big banks” collapse. With the Fed’s obsessive-compulsive maneuvering plus endless regulatory restraints, it would be fair to say the situation was good again, no? Contrarian investors had made A LOT of money inside a short window (2009″13). This recovery was astonishingly rapid, healing as fast as the Terminator’s skin (with the aid of special effects). Index performances continued to stun, powered by the special F/X of low rates and quantitative easing (QE). The combination was an elixir for markets. The DJIA gained 20% of its value today in these nine years alone, compared with the index’s overall 133 years of age. We will possibly never see the likes of it, or the investing opportunity, again in our lifetimes. (Never say never.)

“People fear change the most, perhaps. And change is afoot.”

“And let’s keep those rates at zero,” said the Fed, over and over. Quarter upon quarter, they wouldn”t budge. It appeared”until last Thursday”that we were stuck. Paralyzed by decent-enough sets of official statistics and a host of fears and bad memories from 2008, it was stasis with no clear end. Something didn”t add up.

Why were rates kept artificially low for so long? We aren”t talking 4″5% changes, like in the “80s; the Fed was wringing its hands over fractions of 1%.

Is the crisis over? Or is it not?

The Fed seems to be satisfied for now, more thoroughly so than before. Last week’s rate hike augured future hikes just down the line…so what can the matter be? Nothing specific.

And the next one? Who knows when it might happen? No point in guessing. I recall reporters chitchatting about whether rates would go up in 2011. It’s December 2015 now, and the increase was all of +0.25%. As former IMF chairman Rodrigo Rato told Bloomberg: “You can”t wait forever. You have to do it just before. That’s the problem.”

You need to avert the development, not react to it; by then it’s too late, and the lights of a 100-story skyscraper go black. A nationwide lender goes down. Every effort is going toward the avoidance of any repeat scenario. And then…nothing.

Now Yellen has finally returned us to a familiar “old normal.” It seemed her advisers”presumably the “Masters of the Universe” who travel the Wall Street”D.C. axis”could it be they really were frightened of something. Some terrifying systemic scenario(s) may be out there, undiscovered”must be avoided. Surely, Yellen and her team covered these and their probability.

Is there a “bogeyman” out there?

That’s a big question, requiring level 4 security clearance. What we know is reassuring: The U.S. economy and its capital markets have remained at near-constant highs for several years, despite the Chinese and other emerging markets” slowdowns. It’s not the end of the world.

The last rate change took place in June 2006, two years before the Great Recession of “08. Since then, extreme and tireless caution has been exercised by the Fed, ensuring that the recovery realized itself in full, as it did. Further quantitative easing, if required”especially in Europe”has been promised. An extraordinary epoch came to an end”and good riddance. The job was done. So why do we feel so uncertain?

And why the ten-year wait between rate changes? What concerned them so? No wonder they were loath to make decisive moves until they simply had to”for credibility. The Federal Reserve is technically a private company like Standard & Poor’s, and not immune to reputation. The markets were, by consensus, expecting a rate rise. Standing still for long periods breeds concern.

It looks clear from here. No one wants another financial calamity. Only radicals might disagree. There exist critics who find fault, however. These doomsdayers are not revolutionaries, nor crackpots: They work in the finance sector or study it at Ph.D level. They”re the people least likely to spread upsetting ideas”by using anticapitalist phrases like “monetary destruction” or “the implosion of the financial system””simply to provoke others.

It turns out to be a simple thing that scared the Fed into inaction. This is called the “zero lower bound,” the “0″ before the “%.” If one were to entertain the scenario of a negative interest rate, that same “0″ would be prefixed by a minus sign. A similar rate change would read “0.25%, and that’s just not going to happen in America. Not in America. The Fed continually and likely always will stop short of the zero bound. Nothing more to it. So let’s move on.

Problems are everywhere. The impetuous fall of the emerging markets, to an unexpected degree, negatively impacted Western growth portfolios”joining the line alongside other worrisome issues, from the oil glut to immigration to further systemic risks still hidden inside the markets. In the U.K. and the U.S, on the other hand, unemployment is back down, real wages are rising”while inflation is no concern. China’s downturn from a staggering 16% to an awesome 8% GDP growth per annum might represent a bubble-bursting event, but it’s no reason to keep rates frozen from fear of…what? The end of the world? No.

An End-of-the-World Club does in fact exist, with members in the millions. Much of the “smart money””a good number of those who run funds or study economics”believe we are close to a precipice of sorts. They believe that we are moving closer to a pivotal moment where much that we take for granted about money will change. Even irreversibly. By nature, some observers assume this spells the worst; others think it is an evolution toward a superior system.

For a while, it appeared, the Fed was scared to undermine a working recovery”and major near-miss for the banking sector. At the expense of natural laws of gravity, even? As in: Allow no negative interest, under any conditions? The Fed always, but always, stops short of negative interest, holding at 0% for year on year. While other countries, hard-pressed for options, have initiated this previous taboo”one that is now gaining acceptability in parts of Europe”in order to get things moving again.

Interest rates aside, a perplexing number of experts”in and outside the banking sector”believe that all is far from well in our global economy. Usually highly intelligent operators with a thesis and evidence, that we still remain upon the brink of an unprecedented implosion of capitalism. An apocalypse in the capital markets”one that may change the financial system forever.

Many factors contributed to 2008. Systemic risk was one factor. The fear is that another systemic flaw”a ghost in the machine”may arise and threaten our financial stability. This defect need not be man-made, nor the product of human error (though it could be). Accidental or designed, whether it’s a product that should be outlawed or restricted (like CDOs) or excessive behavior in the trading pools, one instance or two of excess can”by the multiplying magic of leverage”affect thousands or millions of people for the worse.

What is the next systemic problem? Because it’s these problems that threaten everybody in a hyperconnected, globalized economy. What’s got them so spooked?