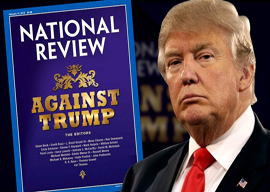 Like many, Donald Trump’s stunning capture of the United States presidency caught me by surprise. I had written off his unorthodox campaign as untenable in the age of safe spaces and political correctness.

Now that the Donald is moving out of Trump Tower and into 1600 Pennsylvania Avenue, there are many things to consider. Who to appoint to the cabinet? How high to build the wall along the Mexican border? What size choke collar to get Paul Ryan?

And when do we begin the purges?

Apologies if I shocked you there. I don”t mean actual, Hollywood-style purges, complete with roaming highwaymen and mass bloodletting. What I”m referring to is a grand tradition on the right: the purging of the dead weight from our newly adrenalized movement.

Back in the 1960s, with Arizona senator Barry Goldwater’s presidential campaign getting under way and communism looming in the East, National Review editor Bill Buckley decided to cut ties with one of the more wacko groups associated with pop philosophical conservatism: the John Birch Society.

“In keeping with Trump’s penchant for revenge, I nominate National Review for an ousting.”

The Birchers weren”t murderous madmen. Their biggest sin was being too conspiracy-minded, accusing many people, including Dwight Eisenhower, of being in cahoots with communism. Even so, they weren”t a good look for Buckley’s budding coalition of conservative intellectuals. So he took a figurative pair of scissors to them, clipping them from NR‘s pages. “By exiling anti-Semites, Birchers, and anti-American reactionaries from its pages, the magazine and its editor determined which conservative arguments were legitimate and which were not,” writes Matthew Continetti of Buckley’s gatekeeping prowess.

Over time, other groups were forced onto the other side of NR‘s firewall of legitimacy: Pat Buchanan’s “conservatives of the heart“ populism; antiwar paleocons; pugilistic anarcho-capitalists. Friend of Takimag John Derbyshire also got the boot for writing what now looks like a healthy note of caution.

National Review, under the tutelage of man-child Rich Lowry, even tried to purge Trump from the Republican primary field earlier this year. Besides finding Trump’s crass language gauche, the clubby conservatives fervently disagreed with his reticence about open immigration, war adventurism, and free trade. The editors gathered all the cuckiest voices in conservatism and gave them space to write one long diatribe that accomplished…absolutely nothing. The “Against Trump” issue caused a lot of waves in the Beltway press. In the rest of America, I suspect it made good birdcage lining.

Well, one good turn deserves another, as they say. And since Trump defied the odds and took control of the GOP, it seems high time for another intellectual purging. In keeping with Trump’s penchant for revenge, I nominate National Review for an ousting. The heady writers and TV pundits who claim the rag as home base need to be kicked out of the club. Their time is up. The pasture awaits.

I”m not trying to be cruel here (though cruelty is probably deserved in this case), but karma is in order. Two of NR‘s leading voices brought this on. First is senior editor Jonah Goldberg, who has mocked Trump’s political aspirations for years. In fact, according to a report by Buzzfeed’s McKay Coppins, Goldberg may have provided the impetus for Trump to take the deep dive into the presidential race.

Days before Trump’s fateful descent down the escalator in Trump Tower to announce his far-fetched bid, Goldberg penned a piece brushing off the amateur candidate. “He’s a more plausible candidate than, say, Honey Boo Boo, but that’s mostly because of constitutional age limits,” he snarked at the time. Trump reportedly read the piece, and when he got to the Goldberg insult, he turned to then adviser Sam Nunberg and asked, “Why don”t they respect me, Sam?” His small team convinced Trump that the best way to retaliate was to run and prove the critics wrong.

Turns out he was more plausible than Jonah thought.