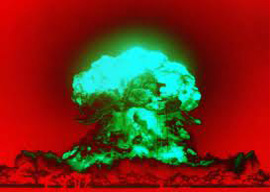 Japan has endured a three-headed monster of colossal catastrophes over the past ten days”a 9.0 earthquake, a tsunami with 30-foot crests, and an unresolved nuclear-reactor crisis that unspooled as a direct result of the first two disasters. The temblor and tidal wave can be blamed on a deliberately cruel God or a murderously impersonal Mother Nature. The reactors” possible meltdown is the result of human diddling with natural laws that mankind has obviously yet to master.

Nausea-inducing footage of a reactor explosion at Fukushima on March 12 set off a solid week of grim news from Japan, each grisly factoid floating like a puff of radioactive steam sailing on a light easterly plume across the Pacific and onto our computer screens. Mass evacuations. Glum civilians in face masks. Iodide tablets. Helicopters clumsily trying to dump water on the reactors and missing. “Suicide squads” of contract workers in radiation suits making $113 a day in exchange for a death sentence. Little yappy dogs at airports being scanned for ionized particles. Geiger counters clicking away. Snowflakes and raindrops with invisible poison falling on mainland Japan and leaching into milk, spinach, and even Tokyo’s drinking water.

Soon the experts and the spokesmen and the overcompensated corporate and governmental spin doctors came to tell us there was no cause for concern, that you”d have to eat a quarter-ton of spinach to get sick and you could guzzle tainted milk for a year without it hurting you as much as a single CT scan would. Don”t think about the heat decay and the cesium-137 and the thyroid cancer, because that one’s easy to cure. Yep, yep, we”ve seen the worst of it, folks, radiation is natural and even good for you”so good it”ll make your teeth glow”so have a plutonium sandwich and relax. Quit freaking out with your paranoid doomsday scenarios and stop stoking irrational fears, you radiophobes. Nuclear energy is as clean as Barack Obama’s freshly laundered underwear, and nobody really believes in windmills and solar power, and it’s all we”ll have left when the last drop of oil runs out, and you”re not one of those kooks who denies global warming, are you? Sure, we told American soldiers it was safe to march toward mushroom clouds before we realized above-ground nuclear-bomb tests were deadly, but we”ve learned from our mistakes and won”t make mistakes again, and, yes, since you asked, I”m getting the hell out of Japan, too, but it’s only because I have to attend a second cousin’s wedding back in the States, not because I”m afraid of anything.

When it comes to the Fukushima reactors, the experts may be correct. When it comes to nuclear technology being as safe, clean, and carefree as Justin Bieber flying a kite through a meadow amid butterflies and chirping sparrows after flossing his teeth and giving his mother a shiny new apple, my instincts tell me they are unforgivably wrong.

It’s possible I”m a dupe of relentless Cold War nuclear psychological terrorism. Until the Soviet Union collapsed, American propaganda machines wielded nuclear devastation as an emotional cudgel much like Christianity keeps its subjects in line with the specter of eternal hell. The main difference is that hell doesn”t exist. I grew up bombarded with images of radioactive clouds and Chernobyl babies and Japanese burn victims, thinking our family would have to build a fallout shelter under our front lawn and trying to figure out what sort of snacks I”d prefer to eat in the eighty or so years before it”d be safe to peek above ground again.

The looming threat of nuclear Armageddon has likely been perched implacably in the back of the planet’s collective unconscious ever since Hiroshima. The last World War ended abruptly with nukes and we all presumed that’s how the next World War would start”and then end about five minutes later, a grim, bleak, species-ending global fireball which if it didn”t vaporize you instantly would lead to an eternal nuclear winter that would poke holes through your cell membranes and eat through your bone marrow until widespread tumors slowly and slimily consumed what remained of you.