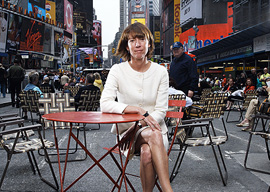 NEW YORK—I used to ride a bicycle in New York when it was still the Wild West out there.

We cyclists were so hated by cabdrivers that a lot of them—and I’m sorry to be racist about this, but it was always the Middle Eastern guys—would try to see how close they could get their front bumper to your rear wheel, so that if you were doing, say, 20 miles an hour, which is not uncommon if you’re hustling, you’d be in constant fear of your foot slipping off the pedal and causing a slight slowdown, which would get your bike flattened like a pita and your body churned into tahini paste.

The problem was, if you had to bail out of a situation like that—let’s say a sadistic Russian limo driver is pushing your ass up First Avenue and you’re waiting on that second wind to kick in and it’s not kicking in and the United Nations headquarters building is looming on the right and they have a security cordon on the left and they’ve got police vehicles and security vans and all kinds of spooky Men in Black bullstuff forming an obstacle course so that you’re afraid of, among other things, snipers—let’s say you’re in that situation and the Russki is not gonna let up, he’s not gonna slow down, you know he’s gonna run that gauntlet like Smokey and the Goddamn Siberian Bandit, then you have one choice and it’s not pretty.

What you’re gonna do is you’re gonna take the curb like Evel Knievel going over the Snake River Canyon—hopefully with more success than he had.

First, you need to execute as much of a complete 90-degree hard right turn as you’re capable of at that speed, which means you’re immediately gonna be in danger of going into one of those long slides underneath somebody’s car that ends up getting a million and a half views on YouTube. But if you do stay vertical and hit the curb straight-on, you’re gonna need to jerk your handlebars straight up so that you can avoid taking a header and making your spine a permanent part of the 12-foot UN security fence.

“She made it pretty clear pretty quickly that she was opposed to permanent spinal injury and brain-squashing on the city’s streets.”

Then, when you’re actually on the sidewalk, you probably need to avoid hitting any babies in strollers or legless street performers, because at this point your principal liability is no longer physical but legal. Bring the bicycle to a complete stop as quickly as possible and ignore the half-dozen people who will now be yelling, “Get that bike off the sidewalk! You can’t ride on the sidewalk! What idiot rides his bike on the sidewalk?”

Pay no attention to these people who hate you almost as much as the Russian limo driver does. You’ve achieved your purpose. You’ve saved your life. Now your gaze should go immediately back to the limo, because you’re gonna watch him until he’s out of sight. What you’re hoping for is that he’ll get all gummed-up in traffic at the next red light. If this happens, you’re gonna make the most aggressive move a bicyclist ever makes. You’re gonna find a lane that goes straight to that red light. You’re gonna put your bicycle directly in front of his stopped car. You’re gonna rest your foot on his front bumper. And you’re gonna look into his eyes. You’re gonna do that for five seconds. I personally don’t like using the single-finger salute. Most bikers do use it, but I prefer the five-second stare—five seconds in which he wonders whether I’m going to block his car from proceeding. If you wanna add a little flair, you can get off the bike and check your tire. And if he has a livery license, stare at his license, too, as though you’re memorizing the number. I’m not gonna turn him in; I don’t have time to go to whatever bureaucratic hearing they have in whatever Brooklyn hellhole they have it in, but I figure I get four, five days of him wondering whether his phone is gonna ring.

Like I said, that’s how the situation was in the days of yore.

In 2007 Mayor Bloomberg appointed a new transportation commissioner named Janette Sadik-Khan, and she made it pretty clear pretty quickly that she was opposed to permanent spinal injury and brain-squashing on the city’s streets. This woman is a goddess. She has done more for the cyclist in four years on the job than anybody did in the previous one hundred. By sheer force of personality she’s managed to install 250 miles of dedicated bike lanes on the New York street grid.

Let me pause for a moment and repeat that:

In one of the world’s most notoriously bureaucratic cities, where it takes two years of hearings and community board meetings to get a new swing set on the park playground, Janette Sadik-Khan has authorized enough bicycles-only pavement to stretch from New York to Washington, DC, and beyond. By comparison, in the bike-crazy city of Austin, Texas, they have something called the Lance Armstrong Bikeway Project. It was authorized in 1999 and they still haven’t finished it, and when they do it finish it, it will be…six miles long.

So this woman is a rock star. If I knew where she lived—and I’m sure it’s somewhere bicycle-friendly, since she sometimes bikes to work at City Hall—I would organize the old bike-messenger gang, the guys who used to stack their bikes on the last subway car and talk about how much we hated the sneering Pakistani cabbies, and we would deliver her morning frappuccino in a spill-free thermos. I would volunteer to go scratch out the name of Robert Moses on every monument they’ve ever erected to him and pencil in Sadik-Khan’s name instead. I’m in awe of Janette Sadik-Khan, and one reason I know she’s doing the right thing is…