Obama Blows up the Bridge 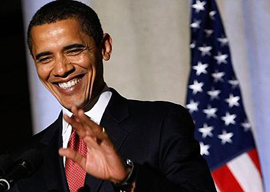 “Rather than building bridges, he’s poisoning wells,” said Rep. Paul Ryan, after listening to Barack Obama’s scathing attack on his deficit reduction plan as a shredding of America’s social contract with the elderly and poor.

Ryan is right. Yet, with Obama’s partisan savagery, virtually calling the GOP plan immoral, we have clarity.

There will be no grand bipartisan bargain on taxes and spending.

The two parties on Capitol Hill and the president will not be coming together to solve the gravest financial and fiscal crisis America has faced since the Great Depression. Between them today is a high wall and a deep ditch.

The heart of the Ryan plan is to turn Medicaid into block grants to the states, so each can decide for itself how best to use the funds, and to convert Medicare into a program where the U.S. government would provide citizens with the funds and freedom to choose whatever health insurance they wished to buy.

But if the Republican Medicare and Medicaid proposals are dead on arrival in Harry Reid’s Senate and Obama’s White House, Obama’s plan to raise taxes is equally lifeless.

“How long can the Federal Reserve continue financing these deficits?”

On MSNBC’s “Morning Joe,” this writer asked Grover Norquist of Americans for Tax Reform exactly how many GOP members of the House had taken his pledge not to raise taxes.

His response: “The commitment that 235 Republican members of the House and 40 Republicans in the Senate have signed is the Taxpayer Protection Pledge—it says no raising taxes. So, taxes are off the table.”

Seems clear. But if virtually every GOP member of the House and 40 GOP senators have signed a pledge not to raise taxes, how can they dishonor that pledge?

How could they agree to raise the top U.S. income tax rate back up to the 40 percent of the Bill Clinton era, as Obama demands, then go home and tell voters they had no choice, that to get a deal with Reid and Obama they had to let the government take a larger share of the income of American citizens?

Put bluntly, a vote by a Republican House to raise taxes as part of a big budget deal would be an act of collective suicide by the party of Speaker John Boehner.

With the exception of the civil rights acts of the 1960s, no programs are more hallowed in party mythology than Medicare, Medicaid and Social Security.