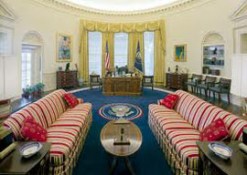 It is becoming apparent for all to see that a man who has made his name as a community organizer does not have the skills to be president of these United States. Maybe he could develop the requisite skills as a governor. Possibly he could develop such skills were he to sit in the Senate for a couple of terms. Yet there are delicate sensitivities, the ability to listen, to stick by your guns, occasionally to remain reticent. These are the fundamentals of a leader, and President Barack Obama has demonstrated that he lacks all of them, most notably reticence. I now think it is clear even to Official Washington that President Obama is the worst president of modern times. President Jimmy Carter is redeemed.

The other night at a White House dinner solemnizing the opening of Ramadan, he leaped right in to endorse the building of a mosque at ground zero. He—a man who has shown no religious fervor during his time in the White House—let out a ringing defense of religious liberty and tolerance. All of a sudden, he was at the center of a national controversy that was growing. It put me in mind of his inability to defuse the controversy over health care. Any sensible president would have relented as opposition to health care reform grew to the majority position. He would have settled for some sort of compromise, but not the community organizer turned president. He wanted it all. He lunged on and created among the electorate a row over national health care that divided the nation and put some of us in mind of a civil war that continues to rage. What is more, he imperiled his party’s margins in both houses of Congress.

“President Obama represents the leadership of a sterile elite. His weird lectures play at the University of Chicago or in the communities he has organized in Chicago, but not among the mainstream of the American electorate.”

Notwithstanding his apparent personal insouciance toward religion, he made clear that the mosque should be built. Who cares about the sensibilities of the loved ones of the 3,000 victims? Or, for that matter, of the 68 percent of the American people who, according to a CNN poll, oppose the mosque? It took him less than a day to make things worse. While on a swing through Florida, he claimed that he was not speaking “on the wisdom” of building the mosque. He merely was commenting on the constitutional right to build the mosque and to practice one’s religion. A right “that dates back,” the prof allowed, “to our founding. That’s what our country is about.” Blah, blah, blah—the community organizer turned lecturer at the University of Chicago could not resist.

Now he has a red-hot national controversy on his hands. It is somewhat like the controversy he created over professor Henry Louis Gates when he pronounced the Cambridge police’s reaction to Gates’ truculence “stupid.” Or when Obama barged into the Arizona immigration pother. He cannot resist showing the world how smart he is, but at what cost? Every Democrat battling in a tight race will be called to answer questions about the mosque. It will become an issue even in remote places, such as Nevada. There the Senate majority leader, Harry Reid, fighting for his seat against a tea partyer, Sharron Angle, has come out against the president. He announced that it is not a question of right, but a question of prudence. He says the mosque should be built elsewhere. How many other Democrats will join him? This could develop into a major rebellion against President Obama’s leadership. It could be the beginning of the end of his presidency.

President Obama represents the leadership of a sterile elite. His weird lectures play at the University of Chicago or in the communities he has organized in Chicago, but not among the mainstream of the American electorate. He has brought them together, and they are against this idiocy. As I said in this space two weeks ago, he represents the leadership of the ruling class. It is not the leadership of the consensus of the American people. Only the most extreme voices in this debate are speaking intolerantly about Islam and its right to build a mosque. Most of the American people are siding with the dread Sarah Palin, who was quick to say: “Mr. President, should they or should they not build a mosque steps away from where radical Islamists killed 3,000 people? Please tell us your position. We all know that they have the right to do it, but should they? And, no, this is not above your pay grade.”

Yet it is. It is above the pay grade of a community organizer. That is what our president is. Increasingly, it is clear that the Democrats brought down on the country a community organizer as president. Maybe in the future, they will consider experience a qualification for the presidency. Possibly the age of charisma is behind us. Possibly Obama even lacks that dubious quality.