Obama Gives Himself Permission To Kill 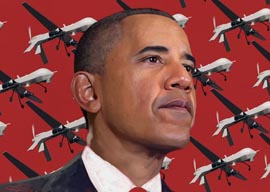 After stonewalling for more than a year federal judges and ordinary citizens who sought the revelation of its secret legal research justifying the presidential use of drones to kill persons overseas—even Americans—claiming the research was so sensitive and so secret that it could not be revealed without serious consequences, the government sent a summary of its legal memos to an NBC newsroom earlier this week.

This revelation will come as a great surprise, and not a little annoyance, to U.S. District Court Judge Colleen McMahon, who heard many hours of oral argument during which the government predicted gloom and doom if its legal research were subjected to public scrutiny. She very reluctantly agreed with the feds, but told them she felt caught in “a veritable Catch-22,” because the feds have created “a thicket of laws and precedents that effectively allow the executive branch of our government to proclaim as perfectly lawful certain actions that seem on their face incompatible with our Constitution and laws, while keeping the reasons for their conclusion a secret.”

“Obama has argued that he can kill Americans whose deaths he believes will keep us all safer, without any due process whatsoever.”

She was writing about President Obama killing Americans and refusing to divulge the legal basis for claiming the right to do so. Now we know that basis.

The undated and unsigned 16-page document leaked to NBC refers to itself as a Department of Justice white paper. Its logic is flawed, its premises are bereft of any appreciation for the values of the Declaration of Independence and the supremacy of the Constitution, and its rationale could be used to justify any breaking of any law by any “informed, high-level official of the U.S. government.”

The quoted phrase is extracted from the memo, which claims that the law reposes into the hands of any unnamed “high-level official,” not necessarily the president, the lawful power to decide when to suspend constitutional protections guaranteed to all persons and kill them without any due process whatsoever. This is the power claimed by kings and tyrants. It is the power most repugnant to American values. It is the power we have arguably fought countless wars to prevent from arriving here. Now, under Obama, it is here.

This came to a boiling point when Obama dispatched CIA drones to kill New Mexico-born and al-Qaida-affiliated Anwar al-Awlaki while he was riding in a car in a desert in Yemen in September 2011. A follow-up drone, also dispatched by Obama, killed Awlaki’s 16-year-old Colorado-born son and his American friend. Awlaki’s American father sued the president in federal court in Washington, D.C., trying to prevent the killing. Justice Department lawyers persuaded a judge that the president always follows the law, and besides, without any evidence of presidential law breaking, the elder Awlaki had no case against the president. Within three months of that ruling, the president dispatched his drones and the Awlakis were dead. This spawned follow-up lawsuits, in one of which McMahon gave her reluctant ruling.