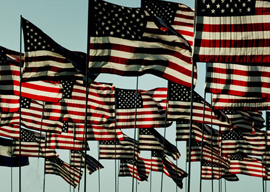 Obama’s State of the Union speech was a smashing rhetorical success, as the New York Post conceded in its editorial the next morning, because it expressed the movement-conservative truth of “American exceptionalism.” The Post quoted Obama’s statement about the US being “the first nation to be shaped for the sake of an idea.” The president went on to affirm the USA’s moral, political, and economic superiority over any other country at any time, thereby demonstrating his capacity for moral growth. At last we discover, according to the Post‘s editorialists, that “America is exceptional even in Obama’s eyes.”  His stress on this patriotic theme indicates that he’s “made notable progress” from the time he believed that “the country he leads is no better than any other.”

What is omitted from this account is how Obama stole the rhetorical clothes off the backs of the GOP and the neocons when they weren”t looking. His performance included most of his usual shtick about amnestying illegals, throwing public funds at favored commercial interests, and keeping his health plan from being significantly amended. But he devoted his speech mostly to telling us how good we Americans are, how we”ve been about ideas rather than any ethnicity since our glorious history’s beginning, and how people unfortunate enough to live outside the American sphere all “dream” of enjoying a democracy such as ours. Although Bush’s speechwriters David Frum and Michael Gerson might have gone beyond this in their rhetorical effusions and their call for democratizing the galaxy, clearly the neoconservatives have acknowledged that Obama last night sounded like them on the “vision” thing.

Obama also had seated in the congressional chamber “exceptional” people, that is, those who are particularly representative of our uniquely propositional country. These were recipients of stimulus money who had made something of their government favors, a few visibly uncomfortable entrepreneurs, members of featured minority groups, and a noticeably gay couple in uniform who were presumably beneficiaries of the new congressional act opening up the military to self-described gays.

All of this talk and demonstration of exceptionalism caused me to come up with my own example of American uniqueness. Let us imagine a Latino who, while trying to sneak into the US in a plane, falls out and loses his/her arm in the ensuing accident. This differently abled “undocumented” may become what Obama hopes other of the “undocumented” will become if only we give them a chance”namely, “doctors, engineers, and scientists.” The illegally arrived amputee, having escaped the border police, may eventually perform pioneering scientific work in the prosthetic-limbs field. Having finished this task, he/she may then volunteer to serve in the military with his/her gay lover and be given a special standing as a special-needs gay soldier. Soon, our hypothetical person and his/her lover’s exceptionalness would result in a personal invitation to a State of the Union speech given by a Republican president trying to reach out.

“It just took a while before we got as good and as sensitive as we are right now.”

Flights of fancy aside, it seems that Bam has learned something else from the neocons apart from yammering about American exceptionalism, or, according to Bill Lind, acting “as if the laws of nature don”t really apply to those residing within the borders of the US.” He has learned that one can be an exuberant America-booster, telling the world how great we Americans are, without having to sacrifice one’s progressive or leftist politics. It’s all quite simple. Once we”ve defined our country as some kind of propositional thing, then the leader is free to identify what the country is and how to force its citizens to comply with that proposition. The proposition has to be inclusive, universal, and egalitarian, like the neocon emphasis on democratic equality and human rights. No other kind of proposition is going to work any longer in a place as diverse and culturally fluid as today’s America. But once you enunciate the “idea,” then you can fit your own program into it, e.g., launching wars to spread democracy or throwing tax money at one’s favorite donors such as teachers” unions.

This propositionalism can be applied to the country’s founding as well as to its present state. Apparently the one big truth was always there but required time to be realized in our everyday lives as a universal nation. As benighted as the American past may seem to admirers of present-day America, the good “idea” was always bubbling up in our civic life. It just took a while before we got as good and as sensitive as we are right now. It’s not the present that’s the aberration. It’s the past that was wrong before it came to resemble the present.

This belief goes down the public gullet better than having blacks whine about prejudice, something that Michelle Obama did during her hubby’s presidential campaign. And the neocons still engage in this gauche practice when talking about all the anti-Semitism that raged in the US before they came into their own. Why the hell dwell on those bad old days when you and your friends are doing so well? It’s better to celebrate America as an exceptional place held together by an “idea,” as long as you get to define that idea and use it to push your own stuff. Who says that Bam can”t learn?