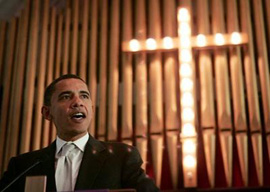 At the end of Sunday mass at the church this writer attends in Washington, D.C., the pastor asked the congregation to remain for a few minutes.

Then, on the instructions of Cardinal Archbishop Donald Wuerl, the pastor proceeded to read a letter.

In the letter, the Church denounced the Obama administration for ordering all Catholic schools, hospitals and social services to provide, in their health insurance coverage for employes, free contraceptives, free sterilizations and free “morning-after” pills.

Parishioners were urged to contact their representatives in Congress to bring about a reversal of President Obama’s new policy.

In forcing the Church to violate its own principles, Obama has committed an act of federal aggression, crossing the line between church and state to appease his ACLU and feminist allies, while humiliating the Catholic bishops.

Should the Church submit, its moral authority in America would disappear.

“If Obama loses the Catholic vote, he loses the election.”

Now, undeniably, the church milquetoast of past decades that refused to discipline pro-abortion Catholics allowed the impression to form that while the hierarchy may protest, eventually it will go along to get along with a Democratic Party that was once home to most Catholics.

Obama’s problem today is that not only is he forcing the Church to violate her conscience, he dissed the highest prelate in America.

In November, New York Archbishop Timothy Dolan, president of the U.S. Conference of Catholic Bishops, held what he describes as an “extraordinarily friendly” meeting with Obama at the White House.

He informed Cardinal-designate Dolan by phone that, with the sole concession of the Church being given an extra year, to August 2013, to comply, the new policy, as set down by Health and Human Services Secretary Kathleen Sebelius, will be imposed. All social and educational institutions of the Catholic church will offer health insurance covering birth control, or face fines.