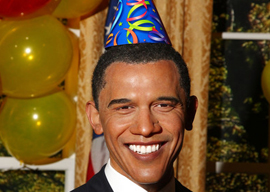 I should have sent President Obama a present for his fiftieth birthday last week, but I didn’t. A lot of things should be but aren’t. Obama should have been an ideal chief of state to reverse the previous twenty years’ self-destructive policies, but he wasn’t. He should have kept a few promises—not to the banks and military contractors, but to the voters. He should have kept the one about ending torture, but he didn’t. He should have kept the implied promise to the middle and working classes to restore their relative earning power to what it was before Ronald Reagan trickled their dollars up to fatten the oligarchy. He didn’t do that, either.

Now, a confession. Mea maxima culpa. I voted for him. Yet I am neither disappointed nor disillusioned. My expectations were low (although not as low as Obama has gone). My vote’s sole purpose was to send the party of Bush and Cheney into the wilderness for four years. To a libertarian left-winger like me, no administration was more venal than theirs. None had shown such contempt for the Bill of Rights, for due process, and for the guarantee of equality inherent in the Declaration of Independence. How could anyone vote for a party whose leaders plundered the US and Iraqi treasuries to benefit corporations in which they had vested interests? Alas, voting Democrat was not much better.

“There are two Obamas: one who cuddles up to his financial backers, the other who fawns on the poor voter. He is the man with a poor mistress and a rich wife.”

Before celebrating his birthday on August 4 in DC, Obama flew off to Chicago for another birthday party. The city is his adopted home, where he learned politics in the Cook County Democratic machine. Chicago has been a one-party fiefdom since Tony Cermak beat the last Republican mayor in 1931. One-party rule in Chicago has lasted longer than it did in the old Soviet Union. The high rollers gave him a birthday bash that cost them up to $35,800  per coiffed head. In the Washington Times, T. J. O’Hara wrote that was “a 17.7% increase year-over-year” on Obama’s 49th and estimated the “take” at $3.65 million. Not bad for a man of the people.

New Mayor Rahm Emanuel, fresh from his disastrous tenure as White House Chief of Staff, was there. Former supporters Tony Rezko and Rod Blagojevich couldn’t make it. Obama airbrushed them from his curriculum vitae, just as he’d done with Bill Ayers, Jeremiah Wright, and Rashid Khalidi (scholar and Obama’s ex-Chicago neighbor, whose only offense was to be a Palestinian). My greatest disappointment was that the woman selected to do the slinky “Happy Birthday, Mr. President” à la Marilyn Monroe was Jennifer Hudson and not, in shimmering sequins, Hillary Clinton. You can’t have everything.