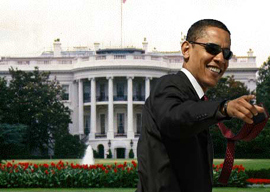 What’s going on with Barack “Open Government” Obama? His Justice Department has prosecuted more people for exposing government secrets than all the presidents from George “I cannot tell a lie” Washington to George “I cannot tell the truth” Bush combined. Compared to his predecessors’ three prosecutions in more than two centuries, Obama has added five in less than two-and-a-half years. Can it be that our “hopey-changey” president has more to hide?

The president’s latest attempt to put a civil servant behind bars for speaking to a journalist is a weak case at best. Stephen J. Kim worked for the Defense and State Departments on North Korean issues. After someone introduced him to Fox News reporter James Rosen, Kim let slip a CIA analysis of North Korea’s likely reaction to a United Nations resolution condemning its nuclear weapons and missile tests. The CIA correctly concluded that North Korea would tell the UN to go to hell and then conduct more tests. Was there anything controversial or life-threatening in leaking a rare assessment in which the CIA could take pride? The North Korea assessment contrasts with the CIA’s failure to predict 1956’s Hungarian revolution, 1989’s fall of communism in Eastern Europe, and 2003’s Iraqi popular reaction to the American invasion. Hey, they’re bound to get it right once in a while.

“Does no one care that this is the most closed-up American government since, well, since ever?”

The leak’s triviality did not stop Obama’s bloodhounds from tracking down Mr. Kim and seeking to send him away for fifteen years under the Espionage Act of 1917. Kim, who immigrated to the US from South Korea when he was eight, is now awaiting trial for allegedly betraying a country he clearly loves. Not even the failure of the Obama Justice Department’s most recent case, against Thomas A. Drake of the National Security Agency, has reduced its enthusiasm for going after Mr. Kim and others who expose what the government wants to keep hidden. Drake’s alleged crime was to share with Siobhan Gorman, a Baltimore Sun reporter now at The Wall Street Journal, classified information about NSA surveillance. Prosecutors sought a thirty-five-year sentence but eventually Drake pled down to a misdemeanor. Meanwhile, Bradley Manning still faces a court-martial on charges of passing documents to WikiLeaks.

Obama’s people appear to be looking for hard men and women to plug the leaks. Step forward, Lisa O. Monaco, recent Obama Justice appointee. At her Senate confirmation hearing, Ms. Monaco said that “it would be my priority to continue the aggressive pursuit of these investigations.” She appeared pleased with the administration’s record of nearly “twice as many prosecutions” than in the rest of American history. Bet on her quick confirmation, after which she’ll be watching us all to make sure no one tells anyone else anything.

Does no one care that this is the most closed-up American government since, well, since ever? You’d think that those who profess to support both governmental transparency and journalists’ right to publish classified data would raise hell, at least until the government acknowledged the difference between spying for Israel and exposing government malfeasance to the electorate. Under this administration, you would be wrong.