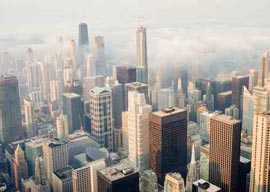 Just as Rodney Dangerfield once went to a fight and a hockey game broke out, the Justice Department, George Soros, and the national media encouraged yet another crime spree in poor Ferguson, Mo., over the weekend on the stated assumption that a Michael Brown protest would emerge.

Why has the Eastern Seaboard power structure been so monomaniacal over the past 12 months about visiting chaos upon this unprepossessing suburb of a flyover city?

Obviously, one reason is pure spite: The establishment immediately went all-in justifying black rioting in Ferguson last August, only to find itself humiliated within a week when convenience-store surveillance footage emerged of the hulking Brown setting off on his violence jag by attacking a tiny Asian clerk.

But a more complicated reason appears to be real-estate-related.

This shouldn”t be surprising because most things are tied into real estate. As Bruce Norris” play Clybourne Park, about integration and gentrification in Chicago, concludes: Humans are territorial animals. This has numerous ramifications, although in an era when it’s considered Donald Trump-level shocking to discuss them publicly, many commentators and authorities can barely begin to make sense of their own feelings.

You may wonder why The New York Times wants to disperse innocent blacks out to the hinterlands to be at the mercy of suburban white racists, but encouraging blacks to exit New York and D.C. is a feature, not a bug.

In the minds of Washington and New York elites, little Ferguson has come to embody their fears that obscure suburban nobodies are conspiring to slow the exodus of underclass African-Americans from gentrifying cities. What if suburbs like Ferguson don”t immediately welcome newcomers from the inner city with well-paying police jobs and city-council posts? How can New Yorkers and Washingtonians be sure of dumping their ghetto blacks on the rest of the country if the rest of the country isn”t wholly under their thumb?

The New York Times has been on a crusade over the manifest injustice that poor urban blacks are “segregated” out of suburbs by not being handed affordable housing in neighborhoods they can”t afford. Thus, to mark the first anniversary of Michael Brown’s assaults, the Times featured a long article entitled “An Indelible Black-and-White Line“ about an unmarried, black St. Louis mother of three whose quest to live in a nice house in a nice suburb has been frustrated by the racist injustice that her Section 8 housing voucher isn”t lavish enough:

But she quickly learned that when you”re black and poor, freedom has its limits. A year after the fatal shooting of Michael Brown, an unarmed black 18-year-old, by Darren Wilson, a white police officer, unleashed a torrent of unrest in Ferguson, the St. Louis region has been embroiled in a difficult discussion about race and class”and not just regarding the police. Questions about whether minorities have access to good jobs, high-performing schools and low-crime neighborhoods have been fiercely debated. And for many, one question informs all those others: Can the barriers that keep blacks out of prosperous, mostly white communities be toppled?

Logically, this is like the barriers that keep you or me from living on the Pebble Beach Golf Links; namely, that guys like Charles Schwab and Gene Hackman have more money than we do. But logic doesn”t have anything to do with it when we”re talking about accusations of racism”you aren”t one of them, are you?

The Obama administration’s new Affirmatively Furthering Fair Housing initiative is, of course, reminiscent of the catastrophic federal programs of 1992″2008, such as the second Bush administration’s 2002 White House Conference on Increasing Minority Homeownership (by cutting down-payment and documentation regulations), which facilitated high rollers like Angelo Mozilo loaning more mortgage money to minorities than they could afford to pay back, all in the name of fighting racist redlining.

Or the White House’s ploy would be reminiscent if we were allowed to discuss what blew up in 2008.

The administration’s plan for Affirmatively Furthering (see if you can quickly enunciate “Affirmatively Furthering” without sounding like Daffy Duck) hopes to encourage suburban racial quotas by facilitating disparate-impact discrimination lawsuits against municipalities, just as the Home Mortgage Disclosure Act that collects data on every bank’s lending eventually helped set off the diversity housing bubble.

Because frank discussion of real estate and race is so forbidden, the administration is clueless that the one government policy that might conceivably help the country would be racial quotas imposing not a minimum number of blacks moving in, but a maximum. What causes white flight is when there’s nothing to stop blacks from taking over.

If the administration had something better in mind than its Ferguson-style flailing, it would make it legal for suburbs to emulate the “black-a-block“ quota that saved Oak Park, Ill., in the 1970s from the dismal fate of the adjoining Austin neighborhood in Chicago. (Here’s a dot map showing the resulting demographic difference as late as the 2010 Census.)

The president himself has been mulling over the political pros and cons of clearing poor blacks out of valuable urban property for three decades now.

Because of the limited intersection of Obama’s race and class prejudices, he doesn”t really enjoy the company of anyone other than Ivy League-level blacks. That’s why he’s presently summering on Martha’s Vineyard, home to Oak Bluffs, the leading golf resort for upscale blacks.