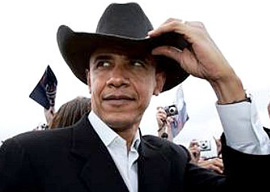 Does Barack Obama have a thing for Latina chicks or what? First there was the famous salsa at Fiesta Latina at the White House with Mexican singer/actress Thalia. The usually cool Obama got so heated up you could almost see the steam rising as he danced his way back to his seat. The president cooled off instantly once he sat down, because that little spin around the room with a sexy diva didn’t exactly impress Michelle, who gave “Mr. Macho” her familiar cold, hard stare.

Nevertheless, when Barack decided it was time to put immigration reform on the table, a trio of Latina lovelies was called in to advise him. Screw Sheriff Joe Arpaio—who needs him? The list of experts included Eva Longoria, the Mexican-American actress born precariously close to the Mexican border in Corpus Christi, TX; Puerto Rican/Afro-Cuban Rosario Dawson; and Honduran America Ferrera.

Eva defined the meeting as a “brainstorming” session where “influential” persons in the media such as herself joined together with Obama to discuss the complex issues of immigration reform, the imminent need to pass the Dream Act, and making politicians who don’t support his immigration views “pay” in 2012.

Eva, who can barely keep her own avocados under control, told an intimate group of reporters that she is integral to what she calls the “conversation” and is a key advisor in helping “reframe the immigration argument” and tie up loose ends with the guacamole-loving Mr. Macho.

“Does Barack Obama have a thing for Latina chicks or what?”

For President Obama it’s never all work and no play. When it’s time to throw a Super Bowl party, who better for the president to share his kielbasa with than football fan Jennifer Lopez? Thus far, the president hasn’t recruited the ex-Mrs. Marc Anthony to be part of his immigration/border security consultative board, but that’s probably because she’s too busy judging the new season of American Idol, leaving no time to advise washed-up American idols.

While J.Lo is otherwise occupied, the president has a bevy of Latina experts from whom to draw advice. For instance, Barack Obama is so invested in cultivating children as future Democrat voters that out of all the nation’s Hispanic educators, the best and most qualified representative is apparently the belly-dancing, hips-don’t-lie Shakira Isabel Mebarak Ripoll.

Along with border security expert Eva Longoria, Colombian pop sensation Shakira was one of those who “met with the president in the Oval Office.” One can be sure that Ms. Shakira shimmied her way into the president’s presence loaded with knowledgeable insights that complemented the other Latina salsa-dancing/border-security/immigration-reform experts who were also there “brainstorming” with the world’s most powerful man.