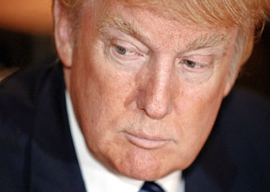 Some of my best friends are “birthers.” So far I”ve resisted the temptation to sign up with them, although I loved that bit about the signature on that Hawaiian “Certificate of Live Birth” possibly reading “U. K. L. Lee.” (Get it? “Ukulele”?)

Yes, it matters who killed President Kennedy. (Psst: The commie did it.) The assassination of America’s commander in chief doesn”t stop being a historical event just because some goofball autodidactic basement dwellers also think it is.

“You”d think folks would pay a premium NOT to have “Trump” stamped on everything from condos to cologne.”

Same with Obama’s citizenship. The Founding Fathers wanted Americans to care about where the president was born. The Constitution is admirably clear in Article Two, Section 1. Conveniently, a commonplace document was invented long ago to provide this exact information: a birth certificate.

Alas, one of those Americans concerned about Obama’s citizenship is Donald Trump, which is about as helpful and reassuring as Ed Gein running for the cure.

Trump began openly asking questions about Obama’s citizenship in April, 2011, joining the chorus demanding that the president show the world his long-form Certificate of Live Birth.

Incredibly, the White House then released the document. Was it authentic? What did it say? All I remember is Trump trumpeting his victory, which reinforced his image as A Powerful Man Who Gets Things Done. But so did Obama when NBC interrupted The Celebrity Apprentice to announce that Osama bin Laden had been killed.

Last week, Trump challenged Obama to unseal even more “secret” documents. Sophisticates on all sides feigned disgust, but much as I hate to say it, Trump is the busted Rolex again here. Everyone would love to peek at the president’s college records. But since “the Donald” is the one doing the asking, that makes it uncool.