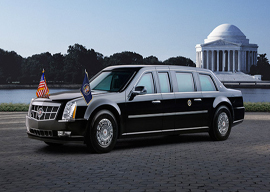 The Beast‘s arrival in Europe brought comparisons to the Hindus” Juggernaut, the giant sacred conveyance that carried the idol of Jagannath, transcendental cause of the Avatars. Mandeville wrote in his Travels about how in the pilgrimage procession worshipers would throw themselves under its crushing wheels to prove their devotion.

From the beginning of President Obama’s European tour, The Beast has occasioned nearly as much comment as its occupant. As under his predecessor, a visit from Obama to a foreign country requires a polite-but-firm American military occupation of the host country. But even with the fleets of helicopters and battalions of Secret Servicemen in place and all the sewer lids welded shut, the president can”t feel safe without shipping over what they call “the most technologically advanced protection vehicle in the world.”

“The Beast pretends to be made in Detroit, though it is really much more a product of the military-industrial complex.”

At about eight tons, it is also the heaviest. With a Cadillac badge on the grille and a GMC truck chassis underneath, The Beast pretends to be made in Detroit, though it is really much more a product of the military-industrial complex. Its security and communications systems are Top Secret, although we know the body has five inches of composite armor. (US troops driving around Kandahar in M2 Bradleys have to make do with slightly over an inch.)

The Beast possesses shotguns and tear-gas cannons for the president to practice impromptu riot control. It has bottles of his blood for emergency transfusions. Even the windows are several inches thick. They do not open, but the car is capable of creating its own atmosphere in case of chemical attack. In keeping with the administration’s guidelines on environmental dissimulation, the mileage is estimated at 8MPG, though the laws of physics suggest it must be more like 8GPM.

The Beast’s first stop was Ireland, where it was secretly filled up by the Secret Service at a BP station. Its only job would be to take the Obamas from the US Embassy to Moneygall in County Offaly. Sadly, it was not up to the task.