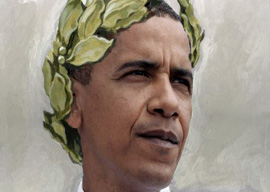 It looks as if Washington has fallen into another trap with Obama’s move on Libya. Yes, the Libyan strongman Muammar Gaddafi is a nutcase and a bloodstained dictator who deserves a merciless kick in the pants and to be bastinadoed within an inch of his life. But the important question remains: Does the Washington-enabled armed intervention into Libya make sense? Patrick Buchanan has argued from the start that military intervention would be a bad idea. Buchanan is unfortunately correct”unfortunate because it would be nice to see Washington honestly come to the rescue of innocent people who need a helping hand.

In the popular imagination, humanitarian intervention motivates the affair. Obama has used it exclusively to justify his policy. Upon his return from South America, he addressed the issue at the National Defense University on March 28:

“…at this particular moment, we were faced with the prospect of violence on a horrific scale. We had a unique ability to stop that violence: an international mandate for action…the support of Arab countries, and a plea for help from the Libyan people themselves….I refused to wait for the images of slaughter and mass graves before taking action.”

We are supposed to buy that at face value.

Prior to leaving for South America, Obama proclaimed strong endorsement for UN Security Council Resolution 1973 and then issued an ultimatum:

“The resolution that passed lays out very clear conditions…these terms are not negotiable….If Gaddafi does not comply with the resolution…the resolution will be enforced through military action.”

Armed with the UNSC resolution, Obama went to war and departed for South America. That was that.

“All of this would be wonderful were it not so hypocritical and ridiculous.”

Team Obama saw no requirement to get congressional authorization of any kind before attacking another country. This should not be surprising at this late date. It reflects the reality of the Imperial Presidency. Obama’s nonchalance irks paleoconservative Patrick Buchanan, progressive Congressman Dennis Kucinich, and libertarian Congressman Ron Paul. But if you think it is an impeachable offense, you are living in a dream world.

This sort of cavalier, unilateral action by the White House has been around for a long time and is therefore condoned. It started with the Spanish-American War of 1898, if not before. The 20th century’s two World Wars were presidential wars, driven by a private White House agenda kept hidden from Congress and the American people. Declarations of war in 1917 and 1941 by the Congress were legal afterthoughts. By design and incendiary policies, Presidents Wilson and Roosevelt made war inevitable. In FDR’s case, he deliberately provoked it.

The phenomenon has come to be called “liberal interventionism” which predates the neocons, and it is taken for granted by the Washington establishment. We have to improve the world and make it over in our own image. All of this would be wonderful were it not so hypocritical and ridiculous. At the same time Obama expresses humanitarian concern for Libyan civilians, he has presided over a greatly expanded campaign of drone attacks in the wilds of Pakistan, outdoing anything perpetrated by Dick Cheney and his sidekick, G. W. Bush. These attacks have resulted in the massacre of hundreds, if not thousands, of defenseless civilians. It is called collateral damage. It has made a lot of enemies for America in that part of the world. It has helped destabilize Pakistan and radicalize a sizable portion of its population.