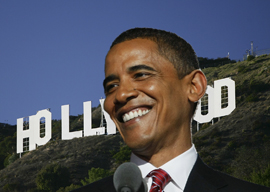 I just flew back from Los Angeles and boy, are my ears tired. The Obamaniacs there are even more brainwashed than their New York comrades. They have no problem with the president’s limitless spending or his warmongering lies and actually think he’s doing a great job.

At least New York liberals have lost a little faith. Salon’s Glenn Greenwald has noticed the left’s “repulsive progressive hypocrisy“ and called out Obama for running as an antiwar candidate and then becoming a war president. Michael Moore did the same.

But on the other end of the country, we have California pundits such as Bill Maher who not only proudly support Obama’s policies, they think anyone who doesn”t is an asshole. Maher’s term for global-warming skeptics is “climate assholes.”

Maher has a segment on his show called GOP Bubble which features stupid Republicans stuck in a big ball, oblivious to the world around them. I watched his show while I was in a hotel not far from HBO’s studios and was confused when he stuck a picture of Mitch Daniels in the bubble and criticized the Indiana governor for scoffing at Obama’s job-creation programs. Maher didn”t mention that Daniels allowed the free market to wrench Indiana out of the Rust Belt and into a huge surplus by privatizing everything from toll roads to welfare-enrollment programs. Maher was angry that Daniels dared question the government’s ability to create jobs and claimed the president has killed about half a million public-sector jobs a year while simultaneously adding over a million private-sector ones. His guest Suze Orman agreed and just about everyone at the table thought it would be a great idea for Obama to run a campaign on his record. Maher then told us we were all better off than four years ago. “Fuck yeah, I’m better off,” he said on the show. “I mean four years ago I was shitting in my pants.”

“The people I spoke to in LA acted as if they had never considered the possibility that the president wasn”t kicking ass.”

For most of 2008, unemployment stayed under 6%. Today it’s 8.3%. Shouldn”t more unemployment cause more pants-shitting? Not everyone is employed in broadcasting. Obama claims to have created three million jobs and his fans are happy to parrot that figure, but there’s an equally strong argument that says he’s caused a net loss of 549,000 private-sector jobs.

The people I spoke to in LA acted as if they had never considered the possibility that the president wasn”t kicking ass. They accepted as Gospel truth that the government can create jobs and that Obama created three million of “em with one magical wave of his pen. They also pointed out that unemployment is down, adding that most economists agree the stimulus worked. Unemployment has stopped skyrocketing, but that’s only in the past year. When I showed them an unemployment graph of the past ten years they blamed the previous nine years on Bush. They also don”t see the similarities between the stimulus and Bernie Madoff. If a dozen economists analyzed his victims” portfolios before he was caught, they”d be impressed. They”d say 10% a year is a fantastic return and the future looks bright”but at what cost? Waterworld seemed like a good idea to somebody at first, too, but it cost $235 million. As the head of the American Action Forum said, “If you throw nearly a trillion dollars at the economy, it has to have an impact.” Sure, doing things such as letting people stay on unemployment for longer enables them to buy more stuff, but that’s not strengthening an economy, it’s fabricating one.

The only time a government can create jobs is when they throw themselves on the funeral pyre and let capitalism’s invisible hand do its thing. In June of 2011, Wisconsin governor Scott Walker’s policies helped create 12,900 jobs“over half of all jobs created nationally that month. Walker hates big government as much as everyone in Madison hates him.