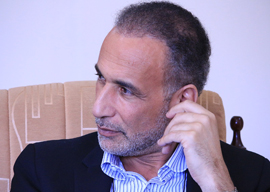 I have met Tariq Ramadan only once in my life and was very impressed by him—impressed unfavorably, that is. He seemed to me then the Jimmy Swaggart of Islamism, or at least the kind of man from whom one would certainly not buy a secondhand car. He had the affability of a carpet salesman in a souk, but (for me) without the charm; in other words, even his affability struck me as sinister. I could go on multiplying the metaphors, but they would all tend in the same direction and be repetitive rather than additive.

I have also read a couple of his books, and they seemed to me to bear the same relationship to scholarship as football commentary does to playing football. I was therefore somewhat taken aback when he was appointed to a chair at Oxford, though it became less surprising to me when I learned that his chair had been endowed by the Qataris (who seem now to have disowned him). That the university had prostituted itself in this way seemed to me also to be emblematic of the condition of the university’s country as a whole: a hybrid of Augean stable and brothel. Perhaps it was always like that, however, and I have merely been slow to recognize it. I daresay Oxford University, which seems to be prepared to do anything for money, would have been happy to institute a chair in human rights endowed by the Gestapo or the OGPU.

“One always delights to believe the worst of those one is inclined to despise.”

I accept that my impressions of Tariq Ramadan are not evidence in the strictest sense, and would not be accepted as such in any court of law in which I should agree to appear. Those who want to read a more scrupulous indictment of Tariq Ramadan would be advised to read the book Brother Tariq, by Caroline Fourest, which exposes his double language, his way of talking in one register to a certain kind of audience and in a completely different register to another kind of audience, as thoroughly as this unpleasant task can possibly be done. I admire journalists who doggedly pursue the evidence for a conclusion that, fundamentally, is foregone.

When I arrived in France last Sunday, then, I have to admit to a certain illicit and no doubt discreditable pleasure on reading Le Journal du Dimanche, the only French Sunday newspaper, whose lead story was a long account of Tariq Ramadan’s arrest for alleged rape, and his subsequent questioning by the police. One always delights to believe the worst of those one is inclined to despise.

As I continued to read, however, I began to feel uneasy—increasingly so, in fact. Here was a man who so far had been found guilty of nothing, who, de facto, was being described publicly as guilty. The presumption of innocence in his case was abrogated because so many people disliked him so intensely.

But of course other interpretations are possible (I am not saying that they would be true). The complainant might have derived her knowledge from consensual sexual activity, though this would go to show that he was a hypocrite as far as his preaching was concerned. She might even have derived knowledge of his scar from third parties, though this seems unlikely, to put it mildly. The point is not that he is innocent, but that he had not been proved guilty, and it seems to me wrong that information intended to be damning should be paraded before the public prior to a proper trial and verdict.