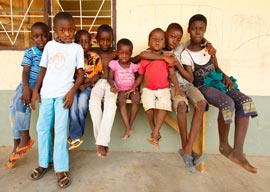 In the 14th century, the English philosopher William of Ockham introduced what has come to be known as Occam’s Razor for its usefulness in slicing through intellectual bloviations: Among competing theories that predict equally well, the simplest should be preferred.

About a decade ago, I coined the term Occam’s Butterknife to characterize the contemporary liberal insistence upon implausibly convoluted explanations.

But now that race man Ta-Nehisi Coates is back with a giant article in The Atlantic about “The Enduring Myth of Black Criminality,” I need a more all-encompassing term to describe this increasingly fashionable rejection of reality. Let’s try: Occam’s Rubber Room.

In “The First Rule of White Club,” I reviewed Coates” best-selling mini-book Between the World and Me about how as a nerdy child he had been terrified of Baltimore’s black thugs, which, due to redlining by the Roosevelt administration, were all the fault of white people. Or, excuse me, of “people who think they are white.”

Fortunately, The Atlantic‘s staffers have edited out of the new article some of Coates” more eye-rolling verbal tics (such as “black bodies”) and left us with 18,000 words of generic professional magazine prose. In the wake of a swarm of derisive comments citing the abundant statistical evidence that black criminality is no myth that greeted a preview of the article, the title is now “The Black Family in the Age of Mass Incarceration.”

Although Coates has benefited in the past from the media’s collusion with the Obama administration to encourage black rage, timing has unluckily turned against him. On Friday, Nate Silver’s FiveThirtyEight website published a study showing that the homicide rates in the 60 biggest cities are up 16% so far in 2015 over the same January-to-early-August period in 2014, which they chose to be Before Ferguson. That’s an additional 482 dead bodies this year, including 77 extra deaths in Baltimore and 51 in St. Louis, the main objects of the Eye of Soros. The majority of the incremental homicide victims are likely blacks murdered by other blacks for the usual knuckleheaded reasons.

“But the simpler interpretation would be a stereotype! And stereotypes, as you learn at college, are mass delusions. Or something.”

Although very few of the murderers are likely to be readers of The Atlantic, Coates” brand of radical chic may have played an indirect role in exacerbating 2015’s slaughter in the cities.

Coates has now assembled a huge pile of evidence”you”ll be shocked, shocked to learn”that ever since Emancipation, experts, white and black (including W.E.B. Du Bois and Jesse Jackson), have publicly wished that blacks wouldn”t commit so many crimes.

But in Occam’s Rubber Room, that just proves…well, it’s not clear exactly what it proves other than that it’s all the fault of white people. Therefore, hundreds of thousands of violent black felons should be let out of prison and blacks should be paid reparations.

More insightful black commentators than Coates have had their say on these policy recommendations: Here’s Dave Chappelle on reparations and Richard Pryor on penitentiaries.

Coates” ugly side is apparent in a long section of his new article about how tragic it is that a black man named Odell Newton is still in prison for the 1967 murder of Baltimore cabdriver Edward Mintz.

Coates, of course, devotes zero attention to the victim. But in just ten minutes of online searching I was able to find out something about the dead man: Mr. Mintz was one brave son of a gun. According to an appeals-court decision, the year before his murder, Mintz had disarmed a gunman named Jessie J. Dunlap with his bare hands. From a 1967 Maryland appeals-court decision:

…Edward Mintz, a cab driver, picked up appellant who asked to go to the 1700 block of Lexington Street. Upon arrival there, Mintz stopped his cab at which time appellant said “This is it, holdup,” simultaneously brandishing a gun. Mintz jumped on appellant and wrestled the gun from his hand. The police then arrived on the scene and arrested appellant.

I include this dusty bit of Baltimore history because you”ll be hearing a lot of Coates” fanboys telling you about the terrible injustice done to Mintz’s murderer, but you sure won”t hear much about the law-abiding workingman whose courage in hacking a cab in Baltimore in the late “60s cost him his life.

Today’s standard story as peddled by Coates rejects Occam’s Razor. For example, in 2011 the Obama administration reported that blacks commit homicide at a rate almost eight times that of whites. Is that proof of “the enduring myth of black criminality”? Or is it just evidence of black criminality?

But the simpler interpretation would be a stereotype! And stereotypes, as you learn at college, are mass delusions. Or something. The professors didn”t explain precisely, but you got the message: Knowing that the average person is wrong about everything is what makes you better than people who didn”t learn that at college.

What distinguishes Ta-Nehisi from his white competitors in the Hate Whitey business is his guileless faith in what he was taught. He really believes that if he amasses a mound of evidence that everybody for the past 150 years whose opinion is worth considering has been concerned about the black tendency toward criminality, well, that just proves how hallucinatorily racist America is. Since we all know from first principles that blacks couldn”t possibly be more inclined toward disorganized crime than, say, Chinese, the fact that every expert has, at one point or another, broken down and admitted that they are just demonstrates how mind-warping white racism must be.

Granted, this is stupid. Occam’s Razor exists for very good reasons. But this is not to say that Coates is disingenuous. Like Malcolm Gladwell, he’s simply ill-equipped to perform reality checks on his own conspiracy theory.