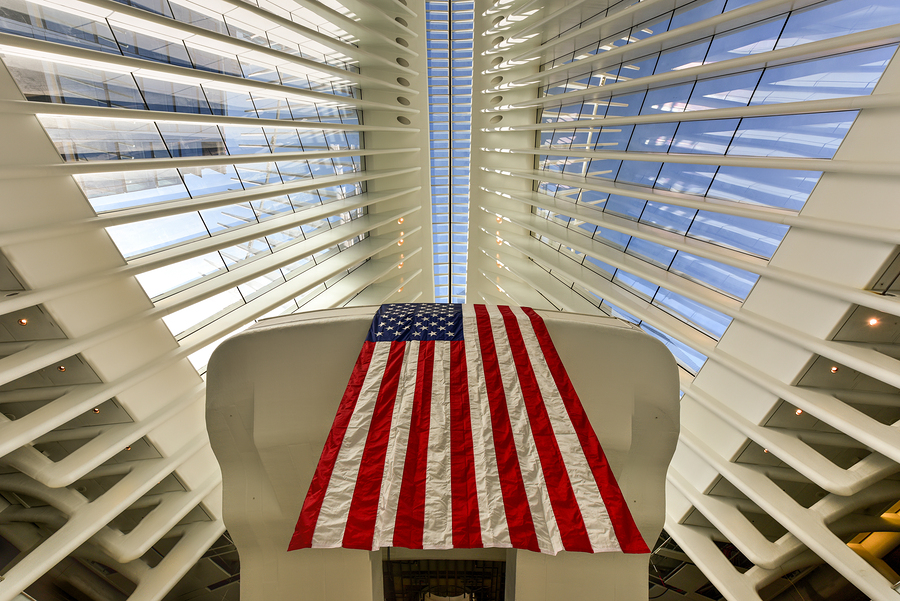 NEW YORK”I”m standing in “The Oculus” on 9/11 and several thoughts are going through my mind.

I know it’s the Latin word for “eye,” but what I”m standing in looks like a frozen Swiss lake encased in the carcass of a whale that’s in the process of being gutted from the fourth to the 79th vertebra. They should have called it the Costa (Latin for “rib”) or the Ingentibus Costam (“giant rib”) or maybe the Ventre Piscis (“fish belly”) or even the Viscera Ceti (“whale entrails”). Nothing about it looks like an eye. Are they trying to scare us? I can imagine the voice of Vincent Price in a 1960s horror film awash in lurid orange tint: “The OCULUS is watching you!” Do they call it an oculus as a way of screaming, “Stop! My eye can”t take it!”

Because it’s true that you can”t take your eyes off the Oculus. You instinctively wanna look upwards instead of downwards, which is not necessarily a good thing in what was supposed to be a train station. I say “supposed to be” because even though the official name of the Oculus is the World Trade Center Transportation Hub, there is no place to sit, no place to buy a newspaper or a cheap coffee, and no signs telling you when trains arrive or leave. In fact, there are hardly any signs at all, in a space that’s designed to get people on and off trains and move them from one transit system to another. The whole thing has the feel of a sci-fi movie in which we, the Ant People, have been funneled into an enormous work of art and challenged to find our way out. But don”t track mud on the pristine marble floors or Vincent Price might have to smush you. I would say that it looks like an Apple Store except…it contains an Apple Store!

There are, in fact, dozens of stores, and they”re not the sort of shops you normally find in a train station. The Oculus is the first subway station where people wonder, “Will I miss the 5:23 to Newark if I stop at Montblanc to get that $7,600 TimeWalker Dual Carbon Chronograph Automatic watch I”ve had my eye on?”

There’s a Hugo Boss, a Giorgio Armani, a Diane von Furstenberg, a Michael Kors, a Tom Ford, a Stuart Weitzman, a Tiffany, a Cartier, a Turnbull & Asser, and even a few stores that aren”t named after fashionistas who shuttle between Paris and Milan, like Tumi, Longines, and Sephora. There are 125 stores in all if you count the ones in World Trade Center Towers 1, 2, 3, and 4, which surround the Oculus.

Which brings me to the second thing I”m thinking about.

Why are we still calling it the World Trade Center?

The World Trade Center is, on the one hand, trillions of microscopic particles that have settled into the crevices of back alleys and embedded in the facades of Wall Street buildings where guys named Winthrop trade debentures, and, on the other hand, 1.8 million tons of twisted metal that has been shipped all over the world as souvenirs. I remember being on the E train on 9/11 when the conductor was supposed to say “This is a World Trade Center-bound E train,” but what he actually said was “This is a…train that will be terminating at 14th Street.” He couldn”t even get the words “World Trade Center” out of his mouth”because the World Trade Center no longer existed. The buildings that have replaced it don”t have the same scale or the same purpose or the same missions that the World Trade Center had, and in fact many of those companies have moved to Jersey City or some other less expensive business haven. And certainly no one mentions today that the Twin Towers were considered supremely ugly, outsize even by the standard of New York skyscrapers, and destructive of several downtown neighborhoods when they were built in the “60s. After they were destroyed, there was even talk of “restoring the old street grid,” meaning getting rid of gargantuan structures and making downtown more pedestrian-friendly. That idea apparently got nuked by the Oculus, which cost, by the way, $4.4 billion to build. And the reason has something to do with the name. It’s a mystical name now, World Trade Center, a name so revered that it has no actual building to identify with. It’s the whole area, the general vicinity. “World Trade Center” is not tangible at all, but diaphanous, metaphysical. The World Trade Center exists because we will it to exist. It’s a faith reference.

Which brings me to the next thing I was thinking about.

Why do people walk around the Oculus like they”re in church?

Some people even cry.

I was an eyewitness to both terrorist attacks and covered the event for United Press International, and I remember on the second day of Ground Zero chaos, they sent a team down into the PATH tunnels”the New Jersey subway tubes that run under the Hudson River”so that they could maneuver as close to the PATH station as possible to determine (a) if the PATH station was still there, (b) if there were people trapped inside it, and (c) if there was any way to fish them out. There was some belief that, even though the smoldering aboveground debris rose nine stories into the air, the PATH station was so deep underground that it might have created a survival space, like West Virginia miners trapped thousands of feet below the surface.

The guy who reported back said, “Yeah, the tunnel is there, the station is there”it’s two feet high.”

For that guy, at least, the Oculus must seem like the proper response: the tallest, most spacious train station in the world, open to the heavens, flooded with light, like a flattened sponge that eventually pops back into its normal shape or, in this case, the shape of a skeletal spaceship with a 300-yard gun turret in the top”because there’s something Star Trek-y about the Oculus as well.

But I witnessed it. It’s there. It’s true. The space inspires both a feeling of religious fervor and the overwhelming desire to shoot a selfie, even if that means lying spread-eagled on the floor like a prostrated monk in some particularly eccentric order.

The Oculus was designed by weirdbeard Spanish architect Santiago Calatrava, who originally said it was gonna be in the shape of a bird. As Santiago sat in his Zurich villa contemplating what New Yorkers would need while moving among eleven subway lines, the PATH system to New Jersey, and the Battery Park City Ferry Terminal, one thing that did not occur to him was the word “maps.” You can walk all the way across the 800,000-square-foot concourse and still have to accost a security guard to say, “Do you have any idea where the tunnel is for the A train?” In fact, the only train that has “World Trade Center” signs on it”the aforementioned E train”is also the only train that cannot be accessed from the Oculus. You have to go up three flights of stairs, cross Vesey Street, and descend through an ancient narrow subway entrance”the kind that looks like it belongs in the opening scene of Shaft“before finding the E train turnstiles. But as I said, Santiago wasn”t concerned with things like ease of access, because he had an epiphany back in 2002: “A dove!”

The Oculus would be all about doves.

Which would seem to be more appropriate for an airport.

We”re talking trains that run under the ground and ferries that go to Hoboken”I”m having trouble with the whole bird thing here.

Anyway, somehow his idea of the retractable-roof skylight that would allow him to make the whole building look like a bird in flight got tossed aside in favor of skinned-sea-beast imagery, but in the meantime he was able to salvage a little strip of skylight at the very peak of the roof called the Wedge of Light.

Every year, on 9/11, the Wedge of Light will be opened in order to follow through on his vision of “a dove released from a child’s hand.” (If you”re not following this, I”m not surprised, because I”m not either. There’s no dove and no child’s hand anywhere in sight.)

So, because the Oculus is situated at a diagonal to the surrounding buildings, the sun can move across the axis of the building and flood the concourse with light through the skylight “exactly on September 11th each year.” (I”m quoting from the explanatory Wedge of Light standee provided for the occasion.)