Of Course a Man Can Imagine What It Is Like to Be a Woman! 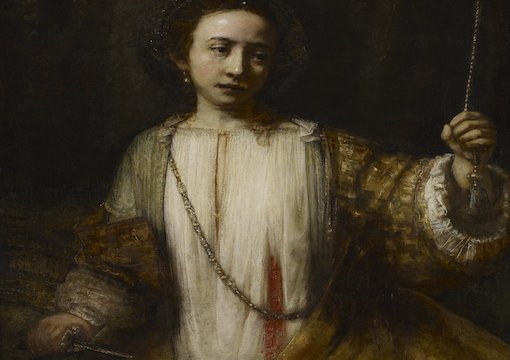 Fitzwilliam Darcy, Mr. Knightley, Dr. Lydgate, Edward Casaubon, Will Ladislaw, and Daniel Deronda are excellent examples of well-rounded and believable male literary inventions with a variety of qualities of character. Portia, Beatrice, Miranda, and Viola are excellent examples of brave, intelligent, and virtuous women, while Lady Macbeth, Regan, and Goneril are equally good examples of wicked women with the added factor, in the case of Lady Macbeth, that she is even regarded with a degree of human sympathy in her wickedness. Shakespeare also wrote a poem treating the story of the rape of Lucretia, the wife of a Roman aristocrat, by the King’s son. Rembrandt, an artist famous for his paintings of marital intimacy, especially with his own wives, produced two paintings of the victim. Seldom (especially in the second version, painted in 1666) have the anguish and shame of a rape victim been more tenderly evoked or better understood. The remarkable thing about these very well-known creations is that they were all created by writers, a playwright, and an artist of the opposite gender to themselves. To take it further, Deronda and Shylock are created by writers who were not Jewish, and Othello is created by a writer who was neither black nor a convert to Christianity from Islam.

Modern orthodoxies might, however, insist that they shouldn’t exist. In Reni Eddo-Lodge’s book Why I Am No Longer Talking to White People About Race, the thesis is that it is futile to speak to white people about what it is like to be black in Western democracies because the simple fact of not being black disqualifies one from the possibility of understanding black experience and, therefore, from having a worthwhile opinion. A similar logic is often applied to the proposition of men being able to understand or hold opinions about female experience.

“Men are from Mars and women are from Venus, but space travel is hugely advanced and regular shuttles have been running for a long time.”

This being the case, how did Rembrandt, Jane Austen, George Eliot, and William Shakespeare, along with a host of other successful writers, manage to pull off the trick of evoking or inventing such believable characters, thus giving the lie to such thinking? Surely it is a combination of two things. Firstly, the intense familiarity with the opposite sex that being social and sexual animals affords us. For example, most women have one or many of the following—a father, a brother, a male sexual partner, a son, a male friend. Secondly, we have the human aptitude for imagination afforded by the unique quality of self-awareness. This means that, although not all humans do it, it is relatively easy for us to think ourselves into the skins of those with a different skin color, religion, status, or sex. Men are from Mars and women are from Venus, but space travel is hugely advanced and regular shuttles have been running for a long time. It is impossible to conceive (pun intended) us without our being constantly in each other’s orbit and being the very opposite to estranged aliens or alienated strangers.

I’m all in favor of the celebratory French dictum “Vive la différence!” For the heterosexual majority the ever-renewed joy of sexual relation resides in the mystery of the otherness of their partners and mates and the fact that the two sexes complement each other to make the complete human wholeness.

However, this can be taken too far. Men and women are from the same sexually reproducing species, and therefore, in sexual relations with each other biological imperatives often encourage lifelong pair-bonds. As a result, sexual relation is the extant bedrock of most of our society. All of this, in fact, leads to an astonishing intimacy. Our other-gendered partners could not be less alien to us as, in a sense, they are us, being part of our wholeness. One can play here with the various meanings of the verb to know. If a couple know each other in the supremely intimate biblical sense, it is pretty likely that they will also know what makes each other tick. That being the case, how could we not have a very close acquaintance with each other? By definition of what sex is, what in the world do we study, whether we like it or not, more than our sexual partners? We may say different things but, for the most part, we speak the same human languages.

Given such intense and inevitable familiarity, a small effort of imaginative sympathy is bound to give intelligent and sensitive people a very good understanding of what motivates the opposite sex. To return to race or religion, that same imaginative sympathy can be applied in exactly the same way. Before we are black or white we are human; hopefully a statement that is the very opposite of racist. When Shakespeare created Othello or wrote Shylock’s “If you prick us do we not bleed” speech, he accessed a black man’s and a Jew’s consciousness by means of a humanity he held in common with them and perfectly understood their plight. Imagination triumphed and our human sameness, rather than demographic characteristics and differences, was insisted and focused on.

You could argue that such imaginative versatility is one of the very sophisticated qualities that distinguish our civilization, one of the jewels in its crown that lead to our ability to embrace considerable diversity within its aegis. So why is it that that very excellent quality is so under attack? What is to be gained from insisting so vehemently and so angrily that there are impassable obstacles in the way at the borders leading to the foreign lands of the other sex or of other races and religions, or that common humanity is trumped by demographic differences?

Who profits and what is driving those who prefer to propagate the myths of antagonism and alienation over the obvious truths of familiarity and commonality? The attempt to drive a wedge between the sexes, on whose happy relations we literally depend for our lives, might seem like an assassination attempt on the human race.

There is a clue in the very particular way chosen to describe human history here:

“The history of all past society has consisted in the development of class antagonisms, antagonisms that assumed different forms at different epochs.” —‘The Communist Manifesto,’ Karl Marx and Friedrich Engels

Some people, then and now, profit from sowing discord and division (then it was class; now it is class, gender, race, and religion) because such false accounts of reality, configured entirely in terms of antagonism, exploitation, grievance, and alienation, afford opportunities and excuses to live out angry dramas and gain power based on the unjustified assumption that they are true. So habituated are we now to preferring to see things in terms of such antagonisms that we are almost dependent on the hits of outrage endorphins they give us and find it difficult to imagine weaning ourselves off them and seeing things in any other way. To see if this is true you have only to watch news programs where virtually every item is routinely and unthinkingly configured in terms of who has been aggrieved by whom and who owes apology and compensation to whom. Division triumphs, and this is why we are no longer allowed to know each other and be friends.