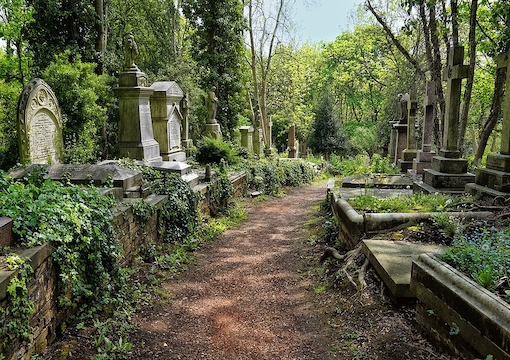 I love a good cemetery, and cemeteries do not come much better than the one in Highgate in London, which I visited recently while staying nearby. It is romantically unkempt and overgrown: A tomb that is sacred to the memory of someone has ivy growing over it as if deliberately pointing to the lesson of human transience.

The cemetery is divided into a west and an east section, the former being the more beautiful but open to the public only on guided tours. The east section has a prominent notice at its entrance with two arrows, one pointing straight on and the other pointing right: straight on for Karl Marx’s grave and right for the public toilets. 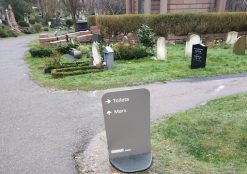 Whether this juxtaposition was meant satirically or ironically, I cannot say, but I doubt that many earnest seekers after Marx would notice it if it had been. More than once we were asked the way to Marx, and I suspect (thought I do not have the statistical evidence to prove it) that the tomb of Marx is the greatest single draw of the whole cemetery: greater than that, say, of Michael Faraday or George Eliot.

“Highgate is still a working cemetery, if I may so put it: It still accepts new residents.”

There is something totalitarian about Marx’s tomb (for which, of course, he can’t be blamed himself). The bust atop the tomb is inappropriately gigantic, suggesting that his thought brings out the grandiose in his admirers and followers, combined with bad taste and lack of aesthetic tact. A smaller bust would have done Marx more honor, but this is not a thought that incipient or frustrated totalitarians would entertain. No wonder that communist monuments were huge without grandeur.

It is curious that the followers of Marx, who was not only an atheist but profoundly anti-religious, should express so much posthumous piety toward him. You can toss religion, or the religious instinct, out with a pitchfork but yet, like Nature itself, it will return. The Marxists, rather than the idly curious, who visit Marx’s grave are surely hoping for some kind of inspiration or even intercession from the great classless au-delà where the common man has presumably finally come into his own, albeit presided over by the redoubtable Karl.

Highgate is still a working cemetery, if I may so put it: It still accepts new residents. My impression is that the recently interred are mainly distinguished in some way, writers, scientists, and the like. Although the cemetery is ostensibly of both commercial and religious foundation (it was established in 1839), one can see the complete evaporation of religious sentiment from English life on the newer tombstones, sometimes replaced by vaguely pagan sentiment. Personally, I cannot help but feel that a tombstone that says “In celebration of the life of…” is a way of whistling in the wind—the wind in this case being the death that comes to us all—its breeziness an attempt to persuade us that death, after all, is nothing much to worry about. We tend to laugh at the Victorians with all their euphemisms for death—called to rest, fell asleep, departed this life, etc., I once counted seventeen in a single cemetery—but I am far from convinced that we have a happier or better relationship with the phenomenon known as death.

Of late years, I have experienced a curious form of guilt whenever I walk round any cemetery. This guilt is a useless and perhaps self-indulgent emotion, because it leads to no improvement in my actual conduct, but still I feel it. The fact is that every cemetery is a repository of tragedies, though usually without any detail: For example, there are graves of young men and women who died in their prime, in their 20s, say. Why them and not me? It is not because of any merit on my part that I have lived three times as long as they. It is far from inconceivable that, in fact, they were better people than I, who deserved a better fate than mine.

Needless to say, I am not guilty in any real or direct sense of having deprived them of a full span (how could I have been when they lived and died before I was born?), so from what do I derive my vague but perceptible sense of guilt?

I remember as a child being told to eat up the food on my plate because there were hungry people in the world. Being something of a brat, I would say that I did not see how my eating food that I did not want would help the hungry. There was undeniably a certain logic to this, but no one ever explained to me that I was being told to eat up my food not to help the poor, but so as not to take it for granted. The fact is that many of us take things for granted in the way (I suppose) that a sardine takes the sea for granted before it is captured and put on the grill.

The war in Ukraine continues; a million have fled, and many more have probably been displaced, or will soon be displaced. My life, however, goes on much as before. Inflation will accelerate as a result, no doubt, but I do not anticipate it doing so at such a rate that I will have to alter my train of life very much. Here, then, is another cause of that vague guilt: knowledge of enormous suffering that I do not share. This evening, indeed, I am going out for dinner with my neighbors, as I do once a week, and my appetite will be unimpaired.

This is not special callousness, but rather an acceptance that the world is not fair and can never be made fair. My ceasing to enjoy myself will help nobody. The pretense that one cannot live one’s life while somewhere in the world there is injustice or disaster was satirized by Dickens in Bleak House. Again, this is not to say that one should be indifferent or uncharitable, but it is a call to honesty. But like a virus in a computer my mind has been infected (slightly) by liberal guilt. The only way to get rid of it is to be grateful: but to whom or to what?