Of Stats and Steroids 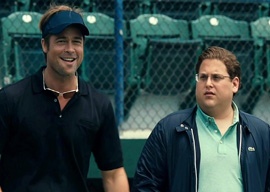 When my son was ten, his baseball coach—inspired by Michael Lewis’s bestseller Moneyball: The Art of Winning an Unfair Game—came up with a statistically brilliant team strategy: Don’t swing. Ever.

Because few ten-year-olds can throw more strikes than balls, his team won the pennant by letting the little boy on the mound walk them around the bases until he dissolved into tears and had to be replaced by another doomed lad.

The next spring, the parents got together and decided not to let that coach return.

Moneyball the movie is, easily, the greatest feature film ever made about baseball statistics. Don’t believe the marketing spin about how this isn’t really a sports movie. This is a baseball statistics movie. If you’ve always wanted to see Brad Pitt swat away a criticism because it was based on a “small sample size,” this is your moment.

Granted, the sample size of $50-million Hollywood movies about statistics is one. Yet even on an absolute scale, Moneyball is a fine film. Considering how unlikely the topic is, the screenplay is a major accomplishment. As a fan of Michael Lewis’s 2003 bestseller about how Oakland A’s general manager Billy Beane used Bill James’s statistical methods to find underpriced ballplayers, I was astonished by the amount of brainpower that has been exerted to make the dialogue informative yet engaging and comprehensible. They had to shrink Beane’s learning curve down to a single year and lump several of his bright young quants into one (played by Jonah Hill, whose shtick I haven’t tired of yet). But the anti-dramatic moral is retained. Play the percentages: Don’t steal bases, don’t bunt, don’t even swing unless you can homer.