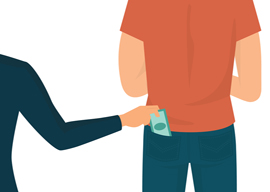 I would make a very bad bodyguard—not that it has ever been my ambition to be one. I would be useless not merely because I am incapable of fighting, but because I am not suspicious (and therefore vigilant) enough. Notwithstanding a cynical view of the world, I am generally trusting of the individuals around me.

In Paris recently an old lady of my acquaintance asked me to accompany her to an ATM from which she wanted to withdraw a considerable sum. She feared to walk about with such a sum in her possession and asked me to guard her.

She took my arm and we walked the hundred yards to the machine. When we got there she searched her bag, but her wallet, containing her credit cards as well as her identity documents, was gone.

She had carried her bag, which unfortunately she had left open, in her usual way, that is to say by a strap over her shoulder hanging in front of her. By the time we reached the ATM, the bag had been slid on her shoulder to just behind her back. She had felt, and I had seen, nothing. The wallet had been swiftly and dexterously extracted from the bag. From a purely technical point of view, the theft had been carried out with great skill, though skill in pursuit of a bad end is hardly admirable. But the thief had the qualities one deemed necessary for a good surgeon: the eye of a hawk, the heart of a lion, and the hand of a lady.

“Notwithstanding a cynical view of the world, I am generally trusting of the individuals around me.”

Needless to say, I felt rather stupid: This was my first-ever excursion as someone’s bodyguard. The old lady, naturally enough, was distressed by what had happened, or rather had been done, to her, but she was kind enough to blame herself for having left her bag open, rather than me for having failed to prevent the theft.

How does someone learn to steal so adroitly from bags carried in the street, so adroitly that neither the victim nor companions nor passersby notice it? Clearly it is a skill, one that can hardly be spontaneously acquired. Are there Fagin-like schools in our cities, madrassas of crime? At any rate, this crime could hardly have been an impulsive response to urgent need such as apologists for crime are apt to cite in defense of criminals. It was strategy, not tactics.

I accompanied the old lady to the nearby police station. The city neighborhood was a prosperous one, in which a smallish flat costs $1 million and when such a flat comes up for sale is snapped up immediately; but even prosperous neighborhoods have their dark underbelly. Oddly enough, even though I had myself lived in the neighborhood several weeks a year for several years, I had not seen it before. My life in Paris is one of dining out, exhibitions, going to the cinema, and writing in my flat.

Outside the police station were several tough-looking men, more paratroopers than civilian police. One of them had an automatic gun at the ready. How boring it must be to stand there all day, weapon at the ready, with nothing to shoot! And how tempting it must be to loose off! They demanded to know why we had come; they were suspicious at first, for one day, almost certainly, a little old lady will perpetrate a suicide bombing. Their suspicions conquered, they politely waved us inside.

The policemen behind the counter were not exactly rude, but neither were they reassuring or sympathetic. For us it was an event of major importance, for them just another case, and one to which Sherlock Holmes would have ascribed no points of interest. They found it hard to grasp that she could not identify herself because all her identifying papers had been stolen. They gave her a choice: wait several hours to make her statement, or come back in a few days’ time with an appointment. Since reporting to the police was for insurance purposes rather than in expectation of capture of the culprits, the latter was the better option.

As we left, another lady was explaining to the men with the automatic weapon that her wallet had just been taken from her bag and she wanted to enter the police station to report it.