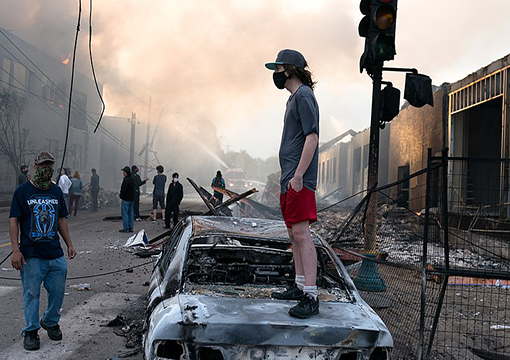 The peaceful protesters turned violent on Friday night here in the Atlanta area, sacking and burning downtown as well as the cushy-cushy Lenox Mall in the high-priced Buckhead neighborhood, grabbing every last trinket and bauble that these oppressed youngsters have been brainwashed to think have been robbed from them for 400 years and counting.

The CNN building downtown took a beating—some would say an incomplete one. I’m typing this 25 miles from that building.

A little more than 28 years ago, I looked out the window of the first floor of my apartment building at young white metalheads and Mexican gangsters streaming north from Hollywood Boulevard toting the looted camping equipment and boxes of hot dogs they’d robbed from unwitting store owners because it supposedly had something to do with police brutality and Rodney King and racism and, fuck, why not, the whole evil capitalistic system.

Over fifty people died in those riots in some half-assed quest to avenge Rodney King’s savage beating at the hands of the LAPD. Rodney, a perennial fuckup, would eventually sink like a stone to the bottom of the swimming pool his settlement money enabled him to buy. Weed, PCP, alcohol, and cocaine were found in his system.

“There is no America anymore. And there will be no easy way out of this.”

Even though hardly any of you ever seem to listen or learn, I feel compelled to tell you a few things they’re leaving out of what has become a drearily familiar sculpted narrative about George Floyd’s death:

• The first two Minneapolis police officers to arrive on the scene were Thomas Lane and J. Alexander Kueng. It is almost suspiciously difficult to find pictures of them online, but judging from the two screencaps here, Lane looks to be a light-skinned black man and Kueng appears to be Asian. There’s no disputing that Tuo Thao, who showed up along with the unfortunately surnamed white officer Derek Chauvin after George Floyd was already handcuffed, is Asian. A brief search of his surname suggests it has a Thai or Cambodian origin. And Derek Chauvin—the white cop with the creepy glower who “took a knee” on George Floyd’s neck and kept it there long after Floyd was unconscious—was married to a Hmong refugee and beauty-pageant contestant; that is, until he was arrested for third-degree murder last week, whereupon she promptly filed divorce papers. But there was only one white cop out of the four—one and a half if you want to speculate about Thomas Lane’s mom—and the only 100% Caucasian one was married to an Asian. None of this has any meaning beyond making the “four racist white cops” narrative look stupid. Not that the narrative will be affected—it’s stupid to think it would.

• At one point during the clip where Chauvin has Floyd down on the ground with his knee on his neck, one of the cops says, “This is why you don’t do drugs, kids.” There were originally rumors that Floyd had said “I can’t breathe” before he was on the ground. The police report also states that he bizarrely threw himself on the ground. The official charging document against Chauvin states that Floyd was not choked or strangled to death but may have died from a toxic cocktail of arrest-induced panic alongside a heart condition and drugs which have yet to be named:

The autopsy revealed no physical findings that support a diagnosis of traumatic asphyxia or strangulation. Mr. Floyd had underlying health conditions including coronary artery disease and hypertensive heart disease. The combined effects of Mr. Floyd being restrained by the police, his underlying health conditions and any potential intoxicants in his system likely contributed to his death.

Again, I don’t expect any of this to change the narrative that he died from his neck being crushed under a racist white man’s Knee of Hate. I will also state that the entire knee maneuver was stupid and probably illegal. That’s an entirely separate issue from whether America should be burnt to cinders as a result.

• The news isn’t saying much about the fact that Floyd had done jail time for a 1998 theft, a 2002 criminal-trespassing charge, a 2005 cocaine possession beef, and a five-year prison stretch for armed robbery after he broke into a woman’s home with several male accomplices and held a gun to her stomach. They also don’t make much note of the fact that the only reason police got involved with Floyd that evening was because a store owner called 911 and said a man fitting his description had tried passing off a counterfeit $20 bill.

So those are a few of the facts that they are either ignorantly or carefully slaloming around as they yet again pitch you a hopelessly simplistic religious narrative about another white demon slaying another black angel for no other reason because not only do all white people have a racist virus in their brain, but this white-supremacist nation encourages cops to do these things and also lets them get away with it.

As a bunch of certifiably retarded shitheads burned his city down, Minneapolis Mayor Jacob Frey said that this wasn’t only about “the five minutes of horror” involving the knee, but about “400 years,” of course! He also said that Floyd “would be alive if he were white.”

He has a point—remember when the racist whites who rule the streets of Minneapolis rioted in 2017 after a Somalian cop shot dead a blonde woman who was only calling 911 to report that she thought she heard someone being raped? Remember when all those beer-swilling rednecks in Dallas looted and stabbed and raped after video emerged of officers joking while a white man died in their custody? Remember when an already riot-prone Los Angeles erupted in flames again after video emerged of rifle-toting police shooting a white man to death after he’d shown no resistance?

Do you ever remember hearing on CNN that black cops are more likely than white cops to kill black suspects? That cops kill twice as many white people every year than they kill blacks? Do they ever talk about racial disparities when it comes to committing almost every crime in the books? Do you ever remember ANY major news outlet even ATTEMPTING over the past 30 years to explain these endless national nightmares beyond a tidy prism of “this was caused by a white supremacist system that needs to be immediately dismantled”?

Amplifying their audacity with every jewelry-store window that gets smashed and every squad car that gets torched, they’re even trying to blame all this on white supremacist groups.

There isn’t a sliver of evidence—at least not yet—that “racism” had anything to do with this, but if you try to disrupt their narrative, they will run you over with a tank.

A very strange world this is, where the “racists” are the only ones who see what’s actually happening.

Last night I did a brief scan of every place I’ve ever lived. Philly—check, rampant looting and fires near City Hall. Brooklyn—oodles of “unrest.” Los Angeles—burning anew! Portland—those people live to riot. And yes, Atlanta again. I started randomly popping in the names of big cities, and the pattern repeated itself everywhere.

And just like the Rodney King riots, the loss of human life already is far greater than whatever crime inspired them. So far I’ve heard about a black cop being shot to death in Oakland. A 21-year-old man being shot and killed in a drive-by during “protests” in Detroit. “Multiple shootings” in downtown Indianapolis that left one person dead. And, the most bitterly ironic of all, a shooting at a Louisville protest intended to mourn a police-shooting victim that left seven injured.

There will be far more blood and far more bodies. And then will come the punishably sanctimonious editorials that prove Americans haven’t learned anything since the Rodney King riots.

There is no America anymore. And there will be no easy way out of this.