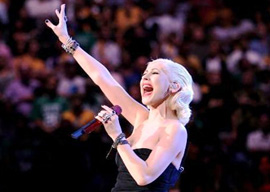 Aren”t you fed-up with goofy renditions of our national anthem? I refer to the dreadful Miss Aguilera’s butchering of “Oh, say can you see…?” at the Super Bowl.

It’s not so much that she skipped a line”an egregious gaffe”it’s the fact that she chose to render the song in a selfish, solipsistic fashion that was not good and an insult to our country.

To sing the national anthem, to “honor our men and women in uniform,” as the clichÃ© goes, should not allow the singer to draw attention to herself with some kind of original, and in this case, grotesque performance.

The Chinese had it right. To open the Olympics they presented a cute female moppet singing “Ode to the Motherland,” which was in fact lip-synched to another voice by a singer who knew what she was doing.

Why didn”t the NFL pre-record Christina Aguilera to avoid this sort of disaster? The pundits are saying that this was the most important performance of her life”and she blew it. Some mauvaise langues have suggested she was plastered.

While I”m at it, what’s with distracting us before the game with a preposterous reading of parts of the Declaration of Independence? I say “parts” because it has become politically correct to skip the Declaration’s castigation of King George for allying with the “merciless Indian savages.” No one wants to be reminded that your Native Americans fought alongside the British.

“No one wants to be reminded that your Native Americans fought alongside the British.”

Furthermore, bringing up the Revolutionary War before a game where the majority of the players is black is not such a hot idea. It appears that no one at the NFL or the Fox network is aware that more blacks (as many as 20,000) fought with the English than with the colonists. Notably, the Earl of Dunmore, English governor of Virginia, offered freedom to any slave who joined his “Ethiopian Regiment“ to fight for the Crown.

All this patriotic stuff is a presumptuous injection of importance into a situation that does not merit it. The Super Bowl had over a hundred million TV viewers”far less than the global audience of some 700 million for soccer’s World Cup final. Besides, the Super Bowl is not the world championship of anything. It’s the final of a game that is only played in the United States. It’s a business, and the guys who run it at a huge profit are keen to present it as a matter of national importance.