Oh! What a Lovely Afghan War 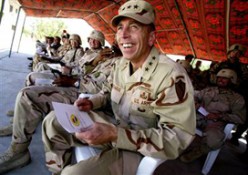 These are words lifted from the diary of Brigadier-General Henry Brooke who, in April 1880, took command of the British garrison in Kandahar just as the Second Afghan Revolt ignited. He was to have a torrid time of it, and his diary contains many a salutary and revealing truth. Wind on to the present and another bloody mess: the US and Britain meddling in Afghanistan. Conference after conference, year after year, and nothing is resolved. There are numerous arguments surrounding our Afghan involvement; there can be none as to the muddle and mistake, the wasted chances, the courage of our armed forces, the dreadful loss in life and limb. Lessons have been learnt, we are told. Sure.

So General Dave has replaced General Stan, the surge is at its peak, the Brits are redeploying, and western political leaders scrabble to construct an exit strategy with as much dignity and little panic as their faltering nerves allow. Meantime, on an almost daily basis, the IEDs continue to winnow our men. Gone is the messianic and democratizing zeal of Bush and Blair. In its place is the weary recognition that the Taliban has the time, the will, the manpower and the advantage. The enemy have got it right and we consistently have got it badly wrong. There are few opportunities left in that benighted land. Our problem. Our fault. Our failure.

Our strategy now—and it is manifestly flawed—is threefold. Firstly, to sustain and strengthen a central government in Kabul whose writ will run throughout Afghanistan. Secondly, to expand and mentor the Afghan National Army (ANA) to enforce centralized authority and replace US and NATO forces as they withdraw from the battle space. Thirdly, to employ that Kabul government and its enlarged military in building the nation and keeping at bay the Taliban. The approach is doomed. Yet even as it morphs into fiasco we will call it by another name, will wash our hands and blame it on the Afghan. Trust me on this—one day, appearing on a flatscreen television near you, will be President Karzai either waving from happy tax exile or hanging from a Kabul lamppost with his genitals mutilated and greenbacks stuffed in his open mouth.

Afghans—especially Pashtuns—will always fight, in particular against invading or occupying foreigners and their corrupt government stooges in Kabul. That is their way and we have provided the excuse. Kinship, blood-feud and skirmish are as much part of their being as is drinking lousy, frothy ersatz coffee for the average Londoner. Add to this the destabilizing great game of India vs. Pakistan, Iran vs. the west, and Islamic extremism vs. all Unbelievers, and the stage is set for meltdown. Do not be misled by the sight of ballot-boxes and national elections. They are a mirage and distraction. Of the thirteen predecessors to President Karzai, twelve were killed, deposed or forced to flee. The auguries are not positive. As Brigaadier-General Brooke observed 130 years ago: “I fear we could not hope to change the nature of the Afghan, who is born a treacherous, lying, murdering scoundrel.”

“Our Vietnam? Only in so far as our technology and military superiority are not enough and matters will doubtless conclude in butchery and with Westerners escaping by helicopter from the roof of the American embassy as enemy forces trundle into town.”

Well, it’s a point of view and one that might resonate today. But the real issue is that we have not delivered on security, development and governance and thus support for us has waned. All our hopes and misdirected energies are invested in creating an Afghan army that—by the nature of its rapid expansion—will be undertrained, ill-disciplined, poorly led and liable to melt away in the face of armed and determined opposition. One young British officer recounted to me how he had warned three Afghan soldiers of an IED-threat up ahead and instructed them to wait for an ordnance-disposal team. They ignored him and accelerated their vehicle through the kill-zone in order to “outrun” the device: they were vapourized in the ensuing blast. It does not bode well. Already, desertion rates are running at 25% (and these are men who will take their weapons with them); already, the Tajik domination of the military has fuelled resentment among the Pashtuns and created yet greater perception of foreign occupation. The seeds are being sown for a new north-south, Tajik-Pashtun, Taliban-Northern Alliance civil war. Hostilities resumed. It is how the Talib originally gained momentum and how it does so again.

The Pashtun Belt is the key and we are—whatever the brave or upbeat talk—currently losing the battle. Boots on the ground simply aggravates the problem and creates more targets; aerial bombardment multiplies the grievances; foreign or ANA troops are seen as little more than anti-Pashtun mercenaries of a corrupt and unpopular Kabul regime. A vicious and calamitous circle. There are 9 million Pashtuns (42% of the population) comprising of some 350 patchwork tribes and inhabiting the main crime and conflict areas. It is because the Taliban has worked so tenaciously at the tribal and grassroots level in cultivating, supporting and exploiting local leaders and village groupings, that its grip has tightened. In effect, the Taliban has ridden in on the back of Pashtun exasperation and resentment.

We could learn much and choose not to, remaining wedded to the heavy-handed and top-down approach that daily stokes the conflict.

Hence—after nine years of blood, treasure, sweat and mourning—rockets fall on Kabul and the country slowly withers. Collapse will occur. What we should truly be doing is working to the grain of Afghan society, localising instead of centralising, building the nation from the ground up. This is not to argue for a return to the failed days of warlordism and local militias. Rather it is to promote the formation of local defence based on tribal loyalties, controlled by the jirgas and responsive to the needs of the people. It was once employed to great effect in southeast Afghanistan, where tribal security was traditionally placed in the hands of three organisations: the Kishakee (scouts who gathered intelligence), the Lashkar (a larger defence force called together to confront a common foe), and the Arbakai (respected tribal police answerable to the jirga and local community and tasked with implementing laws and guarding the tribal borders). Defence was seen to be for the people and arranged by the people, with back-up provided by the national army. Common sense and a light touch. We seem to adopt neither.

Maybe it is too late; maybe we have travelled so far down a particular (IED-littered) road—with attendant pride and vested interests at stake—that change is impossible. A real pity. For with a feel for what is happening on the ground, we could create peace and a structure that might hold. Instead we will become passing interlopers in another failed state.

Our Vietnam? Only in so far as our technology and military superiority are not enough and matters will doubtless conclude in butchery and with Westerners escaping by helicopter from the roof of the American embassy as enemy forces trundle into town.

In one of his last diary entries, Henry Brooke wrote: “Still so many foolish things have been and are continually done in connection with our campaigns in Afghanistan, the present moves after all may achieve nothing.”

The Brigadier-General was shot and killed on August 16 1880 as he led an attempt to clear insurgents from the village of Deh Khoja not five thousand yards from the walls of Kandahar. His body was carried home to Co. Fermanagh for burial with full military honours. Placed on his coffin were sprigs of maidenhair fern grown by his widow from a cutting he had taken while travelling through the Bolan Pass en route for Kandahar. One hundred and thirty years later, the coffins still arrive and we continue to mourn the fallen.