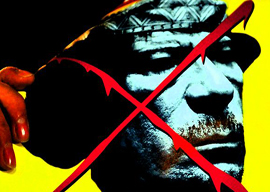 I haven’t got that much time left, but I’d gladly give 10 years of my life to see that homicidal maniac Gaddafi strung up from a palm tree alongside his wart-hog sons, especially Hannibal Gaddafi, an expert in imprisoning and torturing helpless servants and beating up women in posh Western hotels.

What a ghastly world we live in. Gaddafi has been bullying us for 41 years, his henchmen murdering an English policewoman, killing an estimated 1,200 Libyan prisoners in cold blood back in 1996, shooting down an unarmed civilian airline, then cheering when the convicted terror-bomber is released by a spineless British government more interested in oil and gas than justice. As I watch the news of the Libyan massacres, an image of a smiling Tony Blair kissing Gaddafi’s arse keeps flashing before my eyes. If Blair had an ounce of decency left in him he would take a bottle of Chivas Regal and a pistol, write a letter of apology, and do the manly thing. But that’s like asking Alastair Campbell to tell it like it is. Impossible.

About four years ago I met the ghastly Saif Gaddafi in New York and mistook him for a drug dealer—he looked and dressed like one—the same Saif who escorted the great Libyan hero al-Megrahi back to Tripoli when the mass murderer was freed on compassionate grounds. The younger Gaddafi’s arrogance is breathtaking. He went on Libyan TV last Sunday and accused rioters of being “on hallucinogens or drugs.” In the meantime the gangster regime had to bring in French-speaking African mercenaries to shoot unarmed protesters.

“As I watch the news of the Libyan massacres, an image of a smiling Tony Blair kissing Gaddafi’s arse keeps flashing before my eyes.”

The careful diplomatic language various western governments use when dealing with such monsters is depressing. Instead of immediately suspending relations, freezing all Libyan funds—and that includes the Gaddafi family’s vast real-estate holdings in central London—our leaders beat around the bush asking for restraint. Why am I surprised? That French clown Sarkozy allowed the maniac to come to Paris with his hookers and pitch a giant tent right in the middle of the historic city, tying up traffic for the duration. Gaddafi, with his dyed hair and Prisoner of Zenda uniforms, covered in medals despite the fact he’s never been in the line of fire, has gauged the West correctly. We’ll do anything for his gas and oil, and to hell with the humiliation of having to spread open our you-know-what at his command.

Washington is always two steps behind. When Ronald Reagan sent a cruise missile as a greeting to the mad dog back in ’86, he missed the bum. He should have rained a dozen more on him. If—and it is a very big if—the Tunisian and Egyptian armies ever go back to the barracks and those two countries follow the Turkish model, Uncle Sam will be in yet another bind. Sam only knows how to deal with dictators in towel lands. A partnership of equals is beyond the old boy. It will also mean that Israel can no longer brag of being the Middle East’s only democracy. It’s a funny “democracy” that holds more than a million people in an outdoor concentration camp in Gaza because the Gazans chose the Hamas party in a democratic election. Not to mention the occupied West Bank. Not only does Uncle Sam befriend dictators and oppressors of their people, even the sole Middle Eastern “democracy” he supports is an oppressor and jailer of its inhabitants.