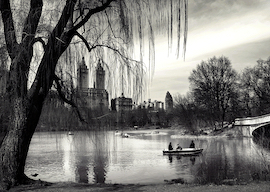 NEW YORK—What follows will bore the pants off you, but at least it beats another piece on Brexit. Perhaps some of you are interested in old Bagel buildings, as I am, but if Boris doesn’t make a deal with Nigel and the vote is split, I will make sure to blow up the houses of those responsible for easing an old Marxist fool into 10 Downing. Boris, I love you, but please call Nigel. So here goes about buildings that are not about to be blown up:

The prewar aesthetic of the Bagel’s storied past was one of grandeur, beauty, and power. The buildings still stand out as a bygone romance with elegance, as opposed to the ugly cutting edge of Jean Nouvel’s and Frank Gehry’s modern monstrosities. A recent coffee-table book about how the upper classes lived back when there was still something called class lists some of these edifices, my present abode having made the cut, 720, 740, 778 Park, and 998 Fifth Avenue, included. The deco era’s most famous architect was Rosario Candela, in whose greatest jewel I now spend my days and nights. After the children departed I sold my town house, the staff having been in open revolt about climbing stairs, and bought an apartment, having come to the conclusion that after a certain age only Nepalese Sherpas live vertically rather than horizontally. I now have more energy for karate and the occasional nighttime pursuit of the fairer sex than before. Yippee!

Buildings made of brick and stone seem to endure forever, and the city’s golden age remains only in such buildings and their enduring appeal. For some of us, that is. Most nouveaux riches opt for glass and height, for cubes, not to mention for interiors that make 19th-century French brothels look ascetic. Limestone is timeless, livable, and elegant, and looks different from office towers and commercial hubs. For me Rockefeller Center and the Chrysler Building are the two most representative of the city’s golden age, the Empire State coming in third.

“The prewar aesthetic of the Bagel’s storied past was one of grandeur, beauty, and power.”

Rumor has it there’s a backlash against glass, especially in areas with a residential character, but I’m not so sure. Bad taste and bad manners are ubiquitous in the city, so why should good taste suddenly prevail in putting up buildings? Further south from where I live on Park Avenue, a very vulgar type I actually went to school with has put up a horror where once upon a time the elegant Delmonico’s used to be. When it first went up I called it an undulating middle finger to good taste, but the place sold out in no time. What I don’t get is why people with lotsa moola wish to live in glass houses that move—as a safety measure, that is—way above the rest of us, without materials meant to project warmth or intimacy. I’ll tell you why: because they don’t live in them, but launder money by buying them. On Billionaires’ Row, as the once-beautiful Central Park South is now called, glassy thin behemoths nearing 1,000 feet tall and selling in the tens and hundreds of millions lie empty, their mostly Chinese owners busy back home stealing Western technology.

My, oh my, the city has really gone to pot when the tallest cloud-scratchers lie empty. Salesmanship language of these behemoths matches their bad taste: One reads or hears things like “We are offering a far more sophisticated experience—rich and layered both inside and through the concierge services.” Rich and layered, what the hell does that mean? Is it code for hookers? Or is it a Chinese communist plot?

Never mind. For those of us raised on movies of the 1940s and 1950s, Central Park West’s great beaux-arts and art-deco apartment towers were the backdrop to our vision of city glamour. Being driven away to school after each holiday, that vista was the last thing I saw before depression set in on my way to regimentation and studies. As I walk in the park nowadays, I remember how those towers used to signify freedom. Nine years of boarding-school chain gangs turned me into someone incapable of working a nine-to-five job, or ever getting out of bed before midday. Now it’s too late to change habits.

And speaking of Central Park, which I actually prefer to Hyde Park because of the more open vistas, it has now turned to hell because of bikers. These bums ignore pedestrian paths, which incidentally are one-third the size of bike paths, so one has to dodge speeding assholes on two wheels. Last week one such jerk brushed by me, and when I said he should stick to bike paths he answered in a typical Bagel manner: “Suck my d—, bitch.” He and his buddy then stopped at a hot dog stand and I went up to him, grabbed him by the lapel, and asked him to repeat it. He shouted at his friend, “Look at what this guy’s doin’.” The jerk turned out to be humorless and earnest, and offered to shake hands once I let him go. He was a typical snowflake. My parting shot was to wish him good luck, but shaking hands was a bit too much, even for a democrat like myself. He then rode away, giving me a middle-finger salute. Welcome to the Bagel.